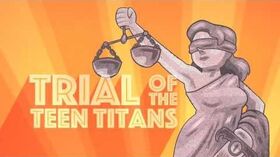 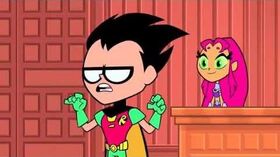 Brother Blood takes the Titans to court; since they do leave quite a lot of reckless destruction in their wake every time they "save" Jump City from evil villains.

The Titans begin the episode by searching Jump City for Brother Blood causing massive damage in the process, but Blood captures the Titans and brings all of them to trial.

In the trial of the Teen Titans, the Brain serves as the judge with Monsieur Mallah as the bailiff, Brother Blood as the prosecutor, and Robin as the defense attorney. The Titans start out loudly, protesting the trial as a farce until Blood asks if they're finished. After a brief pause, Raven pounds the table one more time. The Brain announces that if the Titans are found guilty, they will be sentenced to death.

For his opening statement, Brother Blood attempts to depict the Titans as the true menaces to Jump City, not the villains. As a rebuttal, Robin ends up going into details about his many insecurities, such as his habit of biting his toenails off, and his going to bed and night wondering if he will die alone.

Brother Blood first calls on Starfire to testify. Though Starfire is nervous, Raven assures her that things will be okay, and encourages her to be honest. However, when Blood asks if the Titans cause unnecessary damage, Starfire responds with a yes, prompting Raven to call back "to honest!" When it became Robin's turn to question Starfire, he asked her if she would go out with him. And he keeps asking and demanding a straight answer from Starfire when she does not say yes. Blood objects, saying it is just embarrassing, and his objection is sustained.

Robin later calls on Beast Boy and Cyborg to testify. They say that on the whole, only 4 out of 5 Titans are good people, and they name Robin as the sole exception. When Robin tries to object, the Brain overrules him, saying he cannot object to his own witnesses. Cyborg and Beast Boy start taunting Robin in response, and when the Brain tries to call for order, they start placing orders like at a fast food restaurant. Monsieur Mallah tases them to silence them, and the Brain calls for a recess.

Robin believes the Titans are winning their case, but the others are starting to believe that they are about to be sentenced to death as they see the villains preparing a guillotine outside. But Robin is not ready to concede, and he goes over to Raven to ask her if she can speak in a New York accent. She confirms this by saying in said accent, "What's it to you?" Robin then asks if she knows about cars, and she confirms this by talking about her family's long involvement in the auto industry. Robin is now ready to put on a show for the jury.

When the trial reconvenes, Robin calls Raven as his final witness and asks her to identify a car in a picture, reminding her to use the New York accent. She identifies it as a 1971 Skyhawk. Robin shows another picture, this one of skid marks, and asks if the Skyhawk could have created those marks. After Raven says it could not, Robin publicly expresses doubt at her ability to tell just by looking at pictures, but then she offers to explain. When Brother Blood tries to object, stating that this is irrelevant testimony, the Brain overrules him, curious to know where this is going. As Raven explains her stance, the Titans are impressed at the show she is putting on. Raven concludes that the only vehicle capable of making those marks was an Enfield Hurricane. Robin, quite satisfied, dismisses Raven, and now the Titans are confident that they were able to sway the jury. Robin calls this a show.

The Brain announces that the jury has reached a verdict. In his mind, Robin is already celebrating the Titans' acquittal, and he imagines, among other things, getting high-fives from all of his teammates, and getting a thumbs-up from Batman. But in the end, the verdict was guilty, much to Robin's dismay. The Titans are then killed as the episode ends.

The transcript for "A Farce" can be found here.