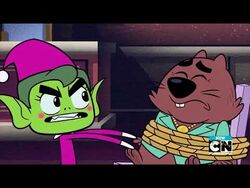 Santa Claus enlists Beast Boy's help in getting him back into the Holiday Mob, which is run by Baby New Year.