Aaron James Horvath (born August 19, 1980) is the co-producer, writer and director of Teen Titans Go!. He and Michael Jelenic are the creators of the series. His IMDb can he found here.

He is also known for the 2010 series "Mad" which was nominated for a prime time Emmy as a director, 2014 "Elf: Buddy's Musical Christmas" as a producer, and the 2005 series "The Buzz on Maggie " as an animator. 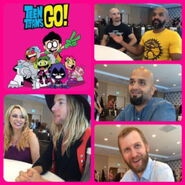