Khary Payton
Aqualad (Kaldur'ahm) is the leader of Young Justice. He made his debut as a minor character in "Let's Get Serious".

Kaldur'ahm is mentioned in "Driver's Ed", where he appears on a poster advertising him working as a DJ. He is also shown on a poster in "Missing", while Garth is a DJ.

Kaldur'ahm first appears in the episode "Let's Get Serious," where he, along with his teammates Superboy and Miss Martian, help defeat the H.I.V.E. Five. He then confronts Robin and calls him out on how silly the Teen Titans are, saying they mock what heroes are actually meant to be.

Kadur'ahm is an Atlantean with light blond hair cut at the bottom, deep brown skin, pale green eyes, high cheek bones, and a lean build. He possesses black, eel-like tattoos that run across his back and along his arms and glow a bright blue when using his powers. He also has webbed hands and feet and possesses a set of gills that allow him to breathe underwater.

His superhero costume is a skin-tight, full-body, red-and-blue swimsuit that exposes his arms and feet. The costume has a set of small dorsal fins on the back of the calves.

Robin demands to know what Aqualad meant by "a pie eating contest".

Cyborg and Beast Boy show up when Aqualad mentions pie.

"You are a mockery of everything the world holds sacred about heroes."

Aqualad and the rest of Young Justice with the serious Teen Titans. 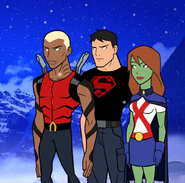 Add a photo to this gallery
Retrieved from "https://teen-titans-go.fandom.com/wiki/Aqualad_(Kaldur%27ahm)?oldid=430613"
Community content is available under CC-BY-SA unless otherwise noted.