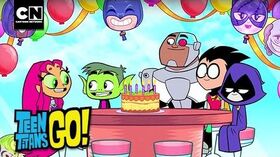 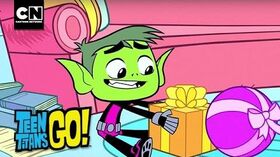 Beast Boy agrees to share his birthday with Starfire after learning she never had one on Earth.

The episode begins with the Titans prepping up for Beast Boy's birthday; Cyborg is preparing the banner, Robin the streamers, Starfire the balloons, and Raven the cake. Beast Boy is acting extremely excited for his special day, making sure the other Titans are fitting everything to his satisfaction. Once he asked Starfire about his piñata and how great it is to have birthdays, she reveals that she does not know the feeling as she never had a birthday on Earth before, due to Tamaran's years being almost twenty times longer than Earth years. This makes both Beast Boy and Starfire sad and upset that Beast Boy decides to share his birthday with Starfire so she can have the birthday experience.

Robin then pulls Beast Boy aside, and he, Cyborg, and Raven warn him that sharing a birthday with someone is difficult, seeing as how Beast Boy now has to share his cake and his presents with Starfire. Not seeing the downside in this, Beast Boy says, "So?" to which Raven replies that sharing a birthday and enjoying it hasn't been done before and is one of the most difficult things in the world to do. Feeling optimistic Beast Boy says they'll be the first, and he and Starfire get excited and do a birthday dance.

The scene then transitions to cake time, where Robin, Cyborg, and Raven sing "Happy Birthday" to Beast Boy and Starfire (taking three times to do so because Beast Boy wants it done perfectly). After the third attempt and Robin's impatience, the two eat their slices of cake and proceed to do another birthday dance in celebration.

Now onto opening the present time, where Beast Boy opens up Robin's present, a tofu block. Starfire opens Cyborg's gift (originally for Beast Boy), and it's a handmade picture of Cyborg and Beast Boy, causing Beast Boy to get a little depressed. The next gift for Beast Boy is from Starfire, and it's another block of tofu, making him less enthusiastic and then throws the tofu over him, having it land on Silkie, who was licking the other block of tofu he got from Robin. Lastly is Raven's gift initially for Beast Boy, which causes her to blush in advance. Starfire opens it, and it is two movie tickets (implying Raven wanted to go on a date with Beast Boy for his birthday). Raven tells Starfire that they should go see the film about the guys whose moms have the same first name (a nod to Batman v Superman: Dawn of Justice), making Beast Boy furious and in tears wanting his gifts back from Starfire, including his movie date with "Mama Raven."

Cyborg and Robin pull him aside and remind him that it was his idea to share his birthday and the consequences that went along with it. Beast Boy, still enraged, goes back to fighting with Starfire to get his gifts back, saying that they were meant for him. Starfire fights back saying that she was the one who unwrapped the presents making them hers. Eventually, Robin puts his foot down and says that if the two don't behave themselves, he'll end the party at once or that they can be nice and beat the piñata. They reluctantly agree because they want the piñata, and it's candy inside, despite being on edge with one another. The two do another birthday dance, this time more angry than excited at each other, before the scene transitions to the piñata scene outside.

Robin sets up the piñata, and Cyborg tells the two to take turns and be nice. However, Starfire and Beast Boy get into a fight over the piñata that involves an aerial fight on the island, over the ocean, and into Jump City. Beast Boy eventually gets the piñata and breaks it to eat the candy inside for himself. Shortly afterward, he sees Starfire crying and notices that he hurt her feelings in the process and apologizes for getting carried away. She apologizes too for getting carried away, and the two make amends. Starfire states that she'll have to wait until next year to open a piñata, and Beast Boy gets another idea. Back on the Titans' island Beast Boy transforms into a donkey and stuffs himself with candy so Starfire can experience a piñata.

Raven acknowledges how she can't believe Beast Boy went through so much trouble so Starfire can hit a piñata (almost in contrast to what she told him earlier about the difficulty of sharing one's birthday), and Cyborg agrees. Starfire then hits Beast Boy three times before he spits out the candy inside him, to which Robin, Cyborg, and Raven gather around and start gathering. Starfire then flies to Beast Boy, and the two say happy birthday to one another before doing yet another birthday dance before the screen goes black, ending the episode.

The transcript for "BBSFBDAY!" can be found here.