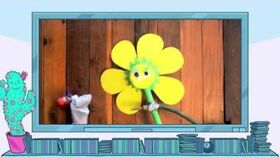 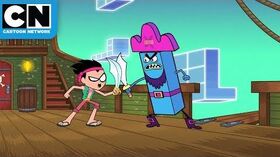 The Titans become hackers to stop a gang of computer pirates.

The episode starts off, as many do, with the Titans watching television. Suddenly, the broadcast is interrupted by a crime alert. Robin is shocked by the alert, leading the other Titans to speculate that some horrible catastrophe is threatening the world. But Robin tells his team that the threat is coming from piracy.

The other Titans become excited because they think they are about to go on a seafaring, swashbuckling, pirate adventure. Robin then tells them that the threat is actually from computer piracy, which the other Titans think means robot pirates. Robin has to explain to them that computer piracy is when bad guy hackers steal digital goods and make them available for free on the internet.

The other Titans get upset and ask if the FBI can handle the problem instead of them, but Robin insists that becoming good guy hackers will be awesome.

He leads his team to a computer room where they transfer their conscious minds into his old computer. Robin creates a digital outfit for himself, which is mostly leather, and logs in under his hacker name, BL4Z3. The other Titans find the outfit and name pretty ridiculous.

While on the desktop of Robin's computer, they mess around with his files, causing the system to crash and reboot. Robin is still determined to have an awesome hacker adventure, connects them to the internet, and does a web search for "pirates". Finding the pirates takes a while since the Titans are "borrowing" WiFi from their neighbors.

Once the search is complete, a portal opens up and a floating pirate ship appears. The pirates on board have a treasure chest full of stolen digital goods. Robin's disappointed that his hacker adventure isn't going exactly as planned and admits the other Titans were right about this hacker adventure all along and letting the FBI handle the Computer Pirates, but the other Titans are now excited and they encourage Robin to open his mind to the new adventure. Robin becomes renewed with added enthusiasm for this new adventure. He and his team get into pirate costumes and board their own pirate ship. They engage the computer pirates in battle, defeat them, and recover the stolen digital goods.

While the Titans are inspecting the treasure chest, several agents from the FBI enter the scene and assume that the Titans are the computer pirates. Before they can explain, the FBI agents charge, wielding katanas, as the Titans run away. The episode goes to black as the head FBI agent slashes at the screen.

The transcript for "BL4Z3" can be found here.