Baby Jack plays as an action-packed baby in the cartoon series and movie, "Babies VS Dogs", a franchise within Teen Titans Go!. So far he has appeared in two episodes, "Classic Titans" and "Kabooms".

He is voiced by Lauren Tom, the voice actress who also voices Jinx and Gizmo.

Although he's barely in his toddler years, Baby Jack was able to land a leading role in the TV show "Babies VS Dogs" and its subsequent movie. He plays Baby Jack (his real name is unknown), an insanely young yet incredibly battle-hardened baby.

In the movie featured in "Kabooms", Baby Jack can be seen chopping wood and building a cabin when Growler, his arch-nemesis, shows up to fight him. Jack tosses a grenade at the dog, but it's a miss. Eventually, the two decide to put their differences aside and fight the Cyberhackers together in order to protect the White House. However, the trio of web gangsters is able to knock the baby and dog out.

Later in the movie, Baby Jack finds himself tied to a chair, a situation he thinks is just as bad as diaper rash. Growler, his new ally, starts to monologue, and then Baby Jack also starts to tell a sob story about his dad not really loving him.

Eventually, Jack is interrupted by the Teen Titans, who, thanks to Raven's magic, entered the movie to save them and put a stop to their boring exposition. After fighting and defeating the Cyberhackers with uninteresting backstories, Baby Jack and Growler celebrate that they have won.

Because he's at most 2 years old, Baby Jack stands at only a foot in height. He has a small tuft of yellow hair right on top of his forehead. Besides that, Baby Jack's doesn't care much about his attire as he's only dressed in a diaper and an eye patch over his left eye. 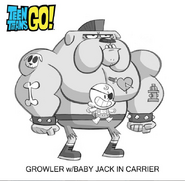 Concept art, with Baby Jack in Growler's baby carrier.
Add a photo to this gallery
Retrieved from "https://teen-titans-go.fandom.com/wiki/Baby_Jack?oldid=377413"
Community content is available under CC-BY-SA unless otherwise noted.