Bane is a minor villain who made a cameo in "The Titans Show".

Introduced in January of 1993 in Batman: Vengeance of Bane #1, Bane was jailed in a prison right off from the get-go. It was here that he learned the ways of the criminal and trained for the profession both physically and mentally. After he was forced to be intoxicated with a drug known as Venom, he strength increased seven fold, and he broke out of the prison with his new ability. His goal in life was and is to destroy Batman, the tormentor of Gotham City and his dreams.

Throughout the series, Bane has barely had any role to play in episodes, usually just appearing on cereal boxes and wanted pictures. Eventually though, in "The Titans Show", the bulking villain reveals himself from beyond a sealed door. With a lineup of other criminals (Poison Ivy, Harley Quinn, and your favorite, Slade), Bane is about to fight the Titans, but the episode already had its fill of action. He reappears for a short cameo in TV Knight 5 with a new design.

Even though he has very limited animation (in the sole episode he's in, he has screen time for 2.3 seconds and just stands still...), we still get an accurate look at Bane's appearance. His entire upper body is immensely strong (must've been working out with Treadmill Spirit), largely outweighing his legs and lower torso. Above his brown shoes are a pair of black pants, and holding them up is a silver belt with a ruby stone in the center. His black tank top shows off his ferocious muscles, and his huge forearms are covered in hair. Bane's left arm has a metallic device encased on it to supply his bloodstream with venom, which he needs every twelve hours to survive. The pink cord attached to the gauntlet wraps around to his Mexican wrestler styled mask. It completely shrouds his head (which looks really small relative to his burly neck) in black cloth with red, glaring eyes (surrounded by white) and a chrome breathing filter. 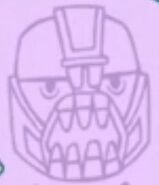 A pic of Bane, the Dark Knight Rises version. 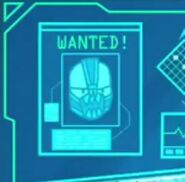 Gotta get him off the streets...

A Bane doll lies with some other of Starfire's Stuffed Animals atop her bed. 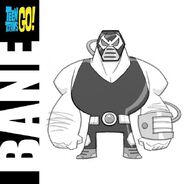 Add a photo to this gallery
Retrieved from "https://teen-titans-go.fandom.com/wiki/Bane?oldid=398847"
Community content is available under CC-BY-SA unless otherwise noted.