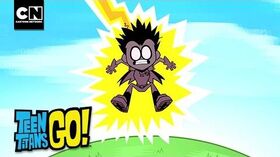 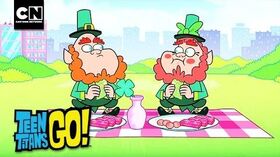 "Beast Boy's St. Patrick's Day Luck, and It's Bad" is the twenty-sixth episode of the third season of Teen Titans Go!, and the one-hundred-thirtieth overall episode of the series.

After the Titans wrongfully pinch Beast Boy on St. Patrick's Day, a curse of very unfortunate bad luck fall upon them. The only way to be freed from the miserable curse is to retrieve some gold coins from a mystical leprechaun. But achieving this task will require a lot more than they think, and ultimately leads up to a pinching showdown between two rival leprechauns.

The exposition takes place at the Titans Tower, where the Pelican is showing off his Irish dance moves. The Titans are eating some breakfast when Beast Boy trots in, merrily dancing. As he gets a carton of milk, he greets these others in a weak Irish accent. Robin informs him that his accent is no good, so he tries two more. Still, Cyborg and Starfire still boo his failed Irish talk. Raven says his last one sounded more in the lines of a pirate, which prompts Beast Boy to turn into a parrot and Cyborg drawing claws, about shouting heart "Arrrs!" The others join in, but Robin looks on in annoyance, asking what occasion the accents are for.

Beast Boy is surprised- it's Robin's special day, St. Patrick's Day! Robin doesn't understand, so Beastie hints that he's a leprechaun. Robin starts to argue with that point, but the others agree because he’s so short. Robin angrily remarks that he's taller, and proves it with a quick back-to-back test. But Beast Boy cheats, using a slanted ( / ) hand and tippy toes. Robin protests, but Raven says he's just in denial. Beast Boy assures his secret is safe with them. When Robin continues to deny, Cyborg agrees that he isn't a leprechaun sarcastically.

Beast Boy goes on about the great 3 "L"s of St. Patrick's Day: Leprechauns, Luck, and Pinches (...wait). He goes on about the rules and mischievously grins that he gets to pinch the others for not wearing green. Raven says he's got no green on, but Beast Boy uses his skin as leeway. Starfire points out that Robin's all good though- he is wearing tattered green pants. But Robin offers to be freely pinched from Starfire, but she points out it's against the rules. Robin strips down, showing way too much flesh (as well as his “tighty-whitey” underpants), burns his green getup on the S.S. Pants, which only creeps her out more.

Beast Boy then goes crab mode, pinching the others all over the place. "All" over. The others won’t stand for this though and strike back with dark magic claws and mechanical pinchers. Beast Boy says no way, it's against the rules, but the others mercilessly close in on him and pinch him viciously. Brutally scratched, Beast Boy says they'll rue this day; they have now fallen under the St. Patrick's Day Curse. The Titans think he’s full of baloney, only to be struck by a bolt of lightning- indoors.

A song montage follows, showing the four missing buses, dropping hot dogs, and getting stung by bees and hungry alligators. The Titans from a blues street band, mourning over their wretched selves. After a few more strikes of lightning, the Titans return to the Tower. Beast Boy is happily playing his portable console and sees the pathetic heroes enter.

Beast Boy has a smug smile on his face as Robin pleads for the repulsion of the dreaded hex, complaining he’s got the worst. Beast Boy says he should be immune, considering his true self. Robin falls into admitting he's a leprechaun, and the other Titans rub it in his face. Robin just demands how to get un-cursed, but Beast Boy has no love for them, as they pinched him when he was down, against the rules. The others plead, and eventually, Beast Boy forgives them when they say they'll do anything.

Of course, he takes the opportunity to crab pinch them again. So, the way to be freed from the curse, Beast Boy explains, is to get two leprechauns to make love. Their happiness should form a rainbow, and traveling to its end, there should be a pot of gold with curse redemption coins. Robin contradicts him- rainbows can't be walked on, they're a spectrum of light displayed on raindrops. Beast Boy retorts he’s just trying to keep the gold concealed though... Starfire points out Robin is a sweaty, smelly, all-out un-dateable leprechaun, so Cyborg is tasked with finding a couple.

A classic picnic with baskets and a quilt is laid out at Jump City Park to lure some leprechauns into falling for each other. Robin debates the probability of the plan and if they are even cursed anymore, but a lightning strike reassures him. Cyborg readies the lunch with a four-leaf clover, and Starfire wonders what smells like a giant butt. Beast Boy says no Irish meal can be complete without corned beef n' cabbage. Cyborg turns on an Ireland cassette tape, and then they all hide in the trees.

Sure enough, a Leprechaun, followed by a Girl Leprechaun (strangely bearded though) emerges from the bushes, and the two eat the meal. Eventually, they fall in love, and a beautiful kiss forms a misty rainbow. The Titans hop onto the bright stripes and quickly ascend to its pinnacle. The ride down is fun and all, but bad luck still plagues the four rule-breakers, as pigeons and geese smack against their faces. In a large rustle, they land on a luscious green island in a mountainous region, ready to have freedom from the curse.

Starfire quickly spots a leprechaun, but it's just Robin, no big deal. But Beast Boy cheers them up when he discovers a black cauldron, filled to the brim with shiny money. The Titans eagerly reach for a coin but are harshly smacked by a cane. Leprechaun, a stout, green-wearing lad, reprimands them from inside the pot; this is HIS gold. The Titans ask about his girl, but he sadly reveals she left him already. Starfire reassures him that he’ll find love once more, and he thanks them, followed by choking.

They explain they need gold to be free of the hex. Leprechaun blames Robin for snitching about the location of the gold, saying he did it for reprisals of always being picked on as the shortest leprechaun. Robin tries to defend himself again, saying he's taller, but the Titans don’t have his back. After another bad luck lightning strike, Leprechaun agrees to hand over a handful of coins... That is if one of them can beat him in an all-out Pinch Brawl! Robin, now willing to accept his inner-self, transforms into a red-haired, green tights-wearing leprechaun (to the amazement of the others), and accepts the challenge with prowess and a well-spoken Irish accent.

The fight is not taken lightly, even if it just pinching. The two fly into the air, throwing pinches and dodging at sonic speed. Robin tries to teleport away, but a charged pinch blows him away, and he plows into a nearby field. Another large pinch blast approaches, but Robin’s Shamrock Shield blocks the incoming attack. Next, it's Robin’s turn to attack! He slowly builds up strength for a power move and then unleashes a giant green fist towards Leprechaun. The fingers are so huge that his whole body is crushed, and he has no choice but submission to the Titans.

Each of the four takes a gilded coin, and a blast of light un-damns them. The Titans cheer and Beast Boy says they should all go back and celebrate St. Patrick's Day like it should be. But Robin decides to stay, as the grass hills and rainbows make him feel at home and at peace. Starfire wishes him the best, and they depart. Robin makes up with his old rival, comforting him about the quick end of his marriage.

Back at the Tower, where the Pelican is still dancing, the Titans are sitting on the roof, staring into the sunset and thinking about Robin. A rainbow flashes on the horizon, and Cyborg remarks that Robin's doing fine with his new life. However, the camera pans to Robin sitting on the edge close by, sulking that his leprechaun friend blew him off when his wife came back.

The transcript for "Beast Boy's St. Patrick's Day Luck, and It's Bad" can be found here.