Were you looking for the character of the same name? 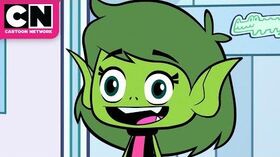 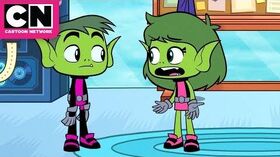 As the Titans deal with Madame Rouge, Beast Boy is excited to meet his female counterpart Beast Girl.

It's a nice, peaceful day at the Tower, with Robin and Cyborg playing video games, Raven reading, and Starfire messing with Silkie. However, their relaxation is shattered by a piercing cry from Beast Boy in the bathroom. Running over there to see what's the matter, they find the green hero huddled inside the cupboard, hugging some toilet paper in fear. Raven asks what's up, and Beast Boy starts obsessing about the creepy man in the mirror. Breaking news comes in from Robin and Starfire: that's his reflection. Now understanding, Beast Boy feels like a real weirdo, which no one protests. Suddenly, Robin's crime alert starts ringing. They can talk about how weird he is later, right now they have to GO!

At the local pizza factory, Robin is busy stealing all of Jump City's pizza... hold up- Robin? The Teen Titans, including Robin, show up, and everyone has mass confusion. Why are there two Robins? Starfire scolds Titan Robin for trying to steal the pizza, but Titan Robin proclaims that Criminal Robin is an imposter. Criminal Robin, thinking quickly, grabs the other Robin and does a quick flipper-oo. When both of them order the Titans to attack, the team is confused. Starfire has the idea of asking what her favorite color is, for only the real Robin would know. When one of them answers purple, Star reveals that she likes all of the beautiful colors equally, and so they all proceed to give him a gang beating. However, when Cyborg and Raven recognize his wimpy cries, they turn to the "real" Robin, who's still punching him.

The imposter turns out to be Madame Rouge, a deadly villain with shapeshifting capabilities. Lying on the ground in a broken state, Robin orders her to give up the pizza. But the evil woman will not submit; to her, pizza is an abomination, and so it must be replaced with pierogis and borscht! Disgusted by her food choice, the Titans charge at her. Before they can deliver a blow, Madame Rouge grabs Raven and mixes herself up with her. Cyborg, confused, blasts the wrong one. Then Rouge moves onto Beastie, then Star, and then Robin, and Cyborg manages to punch the wrong one every time, even when she copies HIMSELF. Completely failing at the battle, Madame Rouge transforms into a cannon and sends them flying back to the Tower in shame...

Back at the base, the Titans are hard at work trying to track down Madame Rouge. A doorbell rings, and Beast Boy volunteers to get it (he wasn't doing anything anyway). For the second time today, Beast Boy screams out in terror. Raven and the Titans, thinking he's just found another mirror, are surprised to see that he's actually talking to another sentient being this time: a green female, to be exact. No one knows what's going on (and the situation is made even worse with horrid grammar), so Raven tries getting them acquainted. The newcomer calls herself "Beast Girl," which makes Beast Boy suspect she's a long-lost relative. However, it turns out that Beast Girl was just as dumb as Beast Boy, having run from her reflection and ended up at the Tower. Beast Boy's mind is completely blown at this point (although his overreaction annoys the Titans a little). An idea pop into his head, though- she could be Madame Rouge in disguise. Backing away from her, Beast Girl and the Titans try to convince him he's just acting weird again. Once Beast Boy finally calms down. Robin orders the team back to work searching for the villain, but Beast Boy wants to hang out with his counterpart for a bit. Since he's a complete freeloader most of the time, Robin's OK with it.

The two head into Beast Boy's filthy room where Beast Girl fills him in on her origin. Years back, when she lived on a jungle island, a green monkey viciously bit her, making her sick. To save Beast Girl's life, her scientific parents gave her a serum that not only cured her, but also turned her skin green and gave the power of animal transformation. Extremely coincidentally, the same exact events happened to Beast Boy. Since they're so alike, they decide to have a little fun together. Both of them head outside to play Frisbee as dogs, bowl as a gorilla and octopus, turn into butterflies, and get scared of their reflections in the mirror. After the day of enjoyment, Beast Boy and Beast Girl are glad their both weirdoes... it makes them feel better about themselves.

Heading back into the living room, the other four Titans greet Beast Boy and Beast Girl rather unenthusiastically. Beast Girl remarks that they remind her of her friends. When Beast Boy gets overly excited again, Robin tells him to shut up; they gotta find Madame Rouge. The female Beastie doesn't exactly know who they're talking about, so Raven and Cyborg fill her in on who she is and her ability to transform into people. This severely freaks her out, because for all Beast Girl knows, SHE could be Madame Rouge. In fact, in her horoscope today, it said she's "gonna make a change." Robin says that's baloney, and when she admits she likes pierogis, Raven also thinks she's being ridiculous. But the fact that the two of them disappeared at the same time is just too much serendipity for her to believe... When the Titans just blow Beast Girl off, she becomes intent on proving her true identity and transforms into a gigantic snake!

After snacking on Cy, Robin, Rae, and Star, Beast Boy tries to convince her that she's not really evil, saying she was like his sister. But Beast Girl (possibly Madame Rouge) is pretty much set on swallowing him already. From inside the snake's stomach, Robin, awaiting digestion, begs Beastie to get through to her. In one last attempt, the hero turns into a fly and begs Beast Girl to look within herself- she's the only one who makes him feel normal, and their nothing evil about that. Thankfully, the torn-up snake finally sees goodness when she looks inward. Literally and figuratively, as she vomits the Titans out. It seems she really isn't the villain. All of a sudden, the couch from behind them starts to talk; the real Madame Rouge has been hiding right under their butts this whole time! Beast Girl goes into mouse form to make a quick getaway, but unfortunately, the Titans are immediately snatched up and taken away. Beast Girl can only look on in shock.

The Titans are lead away to a mysterious Russian complex in the middle of Jump City, where Madame Rouge is trapping them in Matryoshka dolls fitted to their likeness. Just as she is encasing Robin, an explosion goes off in the room. Beast Girl has arrived with her friends, a female Robin, a female Cyborg, a male Raven, and a male Starfire! Beast Girl commands the "British" lady (not the smartest hero), but Madame Rouge isn't going down without a fight. Feminine Robin orders the Opposite Gender Titans to offense, and the battle is on!

During the fight, Robin manages to shake free of his doll enclosure- just in time to see his female counterpart smash a rock into Rouge's face, thrust a fist into her gut, and... her normal-sized hands... Raven, now free, is impressed by how the masculine Raven manages to toss the villain aside with a spell, and the liberated Starfire can't help but notice how awesome and hot the boy version of her is. Cyborg, also free, loves watching female Cyborg fry the Madame's face off. And, morphing into a Tyrannosaurus Rex, Beast Girl only has to swipe her tail once to send the criminal flying off into the distance- vanquished!

Free from her clutches, the Titans generously thank the Opposite Gender Titans for saving them. Starfire's especially grateful for her male counterpart, so Robin politely pushes him out of the window. Beast Boy and Beast Girl, knowing their journey together are about to come to an end, give each other a heartfelt fist bump. Sadly, this heartfelt moment is broken up by Beast Girl worrying that BEAST BOY is actually Madame Rouge. Paranoid that he's a villain, Beastie starts chasing her. The male and female Raven can only look on in shock and call them weirdoes.

The transcript for "Beast Girl" can be found here.