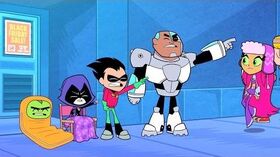 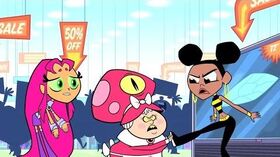 As the Teen Titans sit around the table about to indulge in a Thanksgiving dinner, Robin makes a short toast thanking his friends. He, Beast Boy, Raven, and Cyborg begin eating their dinner rapidly, surprising Starfire who believes they should enjoy their time together and the meal. Robin tells Starfire that there's no time as they have to get ready for Black Friday, saddening Starfire. Cyborg urges Starfire to shove a lump of cranberry into her stomach so they can head out faster, but she announces that she can't participate in the year's Black Friday, shocking the others. Cyborg claims that it's the most important holiday of the year, while Starfire reveals that she doesn't like the holiday. Raven, Robin, and Beast Boy attempt to persuade her, but Starfire reiterates that she cannot participate and leaves to lay down in her bed.

As Starfire dreams, she is visited by the Ghost of Black Friday Past and accidentally angers him when she calls his evening gown a dress. The ghost takes Starfire to last year's Black Friday, where Starfire wandered Jump City Electronics for a surround sound system that the Titans can enjoy only for her to be shoved by Kyd Wykkyd, Más y Menos, Kid Flash, and the system to be taken by Jinx. The Ghost of Black Friday Past tells Starfire that if she hadn't been so courteous, she could have bought the system for her friends. But, Starfire says the item was unimportant. The ghost takes Starfire to Titans Tower where after she fell asleep, the Titans gathered to enjoy their brand new TV but were upset about the poor sound quality. The ghost blames Starfire for the lack of sound, and she begs that he stop showing her the past.

Starfire wakes up in her bed and wonders if her actions caused her friends to be upset. She decides to spend time with them, but not participate in Black Friday. Starfire finds the Titans at the front of a line outside Jump City Electronics and greets them. Robin asks if she came to celebrate Black Friday, but she says that she only came to spend time with them. Beast Boy says that's sweet, but orders her to go to the back of the line. Robin explains that the front of the line is only for people who know the true meaning of Black Friday. So, the Titans send Starfire to the back of the line.

Starfire falls asleep and dreams that she is in an abandoned parking lot save for one truck. She approaches the truck and meets the Ghosts of Black Friday Present who offer her a burger or burrito. They tell Starfire that they're there to show her what she's missing and open the truck. In front of Jump City Electronics, the Titans are shivering in the cold, and Starfire comments that they look miserable. However, upon a closer look, she sees that the Titans are bonding as they wait in line. Beast Boy offers Raven a coffee from Justice Java, and Cyborg warms up the Titans by becoming a heater. Starfire notices that they're not yelling at each other and that Robin hasn't hit anyone with his stick which the ghosts attribute to the Black Friday spirit. Starfire agrees that spending time together is important, but that Black Friday isn't the way. The ghosts begin taunting her, and Starfire pleads for them to stop.

Starfire wakes up as Jump City citizens run past her and enter Jump City Electronics. More run toward her, accidentally carrying her inside the store. She searches for her friends, but calls out to the consumers, telling them that they do not need to behave wildly when Batgirl bumps into her. She tells Bumblebee and Mother Mae-Eye not to fight over television sets as there are plenty, but Jayna runs into her. Starfire spots Aquaman as he fights Aqualad and asks if it's worth sacrificing their soul for unnecessary possessions, but is knocked out by Doctor Light's elbow.

Starfire meets the Ghost of Black Friday Future and she takes her to an ally where Robin, Beast Boy, and Raven are rummaging around. Starfire wonders if they're searching for clues to a criminal investigation. However, the ghost informs her that, without Starfire, they paid too much for goods on Black Friday and are reduced to living with the rats and filth. She asks about Cyborg's whereabouts. The ghost tells her that he was trampled to death when trying to buy a laptop that was ninety percent off. Starfire promises to change her ways and honor Black Friday in her heart.

Starfire finds herself at Jump City Electronics and asks an employee, the The Brain, the date. He informs her that it is Black Friday and Starfire, noticing that it's not too late to change, tells him to get out of her way. She finds the Titans fighting with Brother Blood, Control Freak, Kitten, Mad Mod, Mammoth, Mumbo Jumbo, Ravager, and Doctor Light and knocks the villains to the side. She rallies the Titans to participate in Black Friday. Cyborg transforms into a shopping cart, and the Titans take merchandise from Mammoth, Billy Numerous, and Killer Moth. They spot Jinx running to the cashiers with a surround sound system in her hands and chase after her. The Titans run over her, and the system lands in Starfire's arms.

The transcript for "Black Friday" can be found here.