Leader of The Powerpuff Girls
Superheroine

We've come from another dimension, looking for a dangerous villain: Mojo Jojo!

Blossom was created by Professor Utonium, a scientist striving "to create the perfect little girl". He combined sugar, spice, and everything nice. However, during the experiment, he accidentally added a mysterious substance called "Chemical X". As a result, Blossom and her triplet sisters, Bubbles and Buttercup, were created and granted a wide variety of powers and abilities, that they utilize to safeguard all of Townsville form any adversary.

She has long, red-orange hair tied up into a ponytail pinned with a heart-shaped hair clip and wears a huge, red bow on top of her head. She has huge, pink eyes. She also wears a pink dress with a black stripe in the center along with white tights and black Mary Jane shoes.

She appears to be the self-proclaimed leader. She is very orderly, having all of her things organized in a specialized place. According to the YouTube short Run, Blossom, Run, she has perfect school attendance and has already been accepted into a top university, to which she has gained a paranoia to being late in that she sometimes gets up early, even on weekends.

She usually exaggerates and sometimes speaks in a naggy or even condescending nature. She is also very analytical in dealing with the bad guys, coming up with most of their plans, but still is protective and cares for the well being of her sisters and others. She is also very studious, as she is drawn to intellect-enchanting toys and has often been seen sitting and reading a book. Another sign that she is studious is that in the original series episode Power-Noia, she has a nightmare about failing a test she forgot to study for. 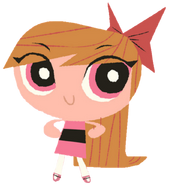