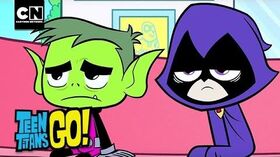 "Booby Trap House" is the third episode in the fourth season of Teen Titans Go! and the one-hundred-sixtieth overall episode of the series.

After being left alone at home, Cyborg and Starfire booby trap the Tower for safety and try to act more adult-like while Robin, Raven and Beast Boy head off on another road trip.

Raven and Beast Boy are sitting on the couch while Robin paces back and forth with suitcases. He wonders where Starfire and Cyborg are, as it's almost time for his "perfect packing presentation." The Teen Titans are going on another road trip tomorrow, and he wants to make sure that there are no suitcase-related incidents like the last time. (There's a flashback to the Titans on the road, all of them singing "John Jacob Jingleheimer Schmidt" when suddenly, an over packed suitcase explodes, sending the T-Car over the edge of a cliff.) Robin, no longer interested in waiting for the others, decides to get the presentation rolling. He opens a suitcase to begin his demonstration, and is freaked out to find Cyborg and Starfire crammed in, apparently playing hide-and-seek.

Before Robin can go on with his presentation, Cyborg declares him the big winner and hands him a trophy. Robin, filled with joy at winning something for once, starts to deliver a speech. Suddenly, he realizes the the trophy is all part of an immature prank. He tells Cyborg and Starfire that they need to grow up and act their age. They disagree with him and still continue acting like children. Robin tells Starfire and Cyborg that they can prove themselves by going to bed early so they can be up by 5:00 AM sharp for the big road trip.

Unfortunately for him, Cyborg and Starfire have other plans. They take turns making animal sounds all night, making it nearly impossible for Robin to fall asleep.

Robin wakes up groggily the next morning and realizes he's over slept. Panicked, he rushes to get the other Titans out of bed and into the T-Car. Beast Boy is tasked with doing a head count to make sure all the Titans are accounted for, but in his sleep-deprived state he incorrectly counts five heads in the car. Satisfied with the count, Robin puts his foot to the accelerator and they leave the tower with a crash. The loud noise is enough to awaken Starfire, who is still in bed. She flies around to greet her fellow Titans, but can not find them anywhere. The only other one around is Cyborg, and he has woken up as well.

Cyborg thinks that there's no way the other Titans would have left them behind. Starfire then jumps to the conclusion that they must have been eaten in their sleep by terrible monsters from under the bed and in the closet. The two are extremely terrified by this and begin to overreact. Starfire then suggests that they honor their dearly departed friend Robin by growing up and protecting their home from the monsters. The best way to do that, they conclude, is by booby trapping the tower!

The two set out conducting one of the most fearsome and deadliest booby trap installments ever- they set mines, arm the Titans Tower with bears, line the floor with tripwires, position bee hives, and overall make the place a hellhole. After their work has been completed, they stand above the roof, proud of their accomplishment and of their new grownup status.

Meanwhile, out on the open road, Robin suddenly realizes that they are missing something: TANGERINES! They all start to freak out, worried that they are miles away from any other source of vitamin C. But Raven finds the tangerine bag and they all calm down to indulge in a tasty snack.

Back at the Tower, Starfire and Cyborg are getting ready for a very grown-up dinner of sweet meat lasagna, edamame in a cherry-chocolate reduction, and fizzy water (aka soda). Talking like bourgeoisie adults, they express delight and dine on the feast before them, a going away meal for the impending battle against the monsters. The curtain closes on their very fine meal.

Robin, Raven, and Beast Boy have finally arrived at their destination, near the city of Metropolis. Robin asks Beast Boy to wakeup Cyborg and Starfire, but the two are no where to be seen (even with Beastie's super-detective snake mode!) Robin, paranoid that the two could be destroying the tower or injuring themselves, decides they must get back in the car and drive to the Tower as quickly as possible. Transitioning back to Starfire and Cyborg, who are seen on the floor crying out in pain from eating too much fine food. Just then, the T-Car crashes into the tower, startling Cyborg and Starfire. They think the monsters are finally coming to get them, and they hide under the couch. The two begin to doubt that they are grown-up enough, but they must try and defend their home no matter what...

Cyborg presses a button, activating a beehive detachment door in the Titan Tower elevator (in which the returning three are in). The bees sting Raven, Robin, and Beast Boy, and then a follow-up bomb on the beehive goes off, covering them in globs of honey. When the elevator doors open, Starfire and Cyborg are unable to recognize their lumpy, honey-coated friends. They run away, leading them into a series of boobies, including a bear trap, a kiddie pool full of electric eels, an explosive on a plunger, a raccoon on a string, a swinging log covered in spikes, a mine on a seesaw, a open-door-grenade mechanism, a bear in a trap door, a meat-tripwire that triggers Dave the wolf, a motion triggered crusher, and an older model of the T-Car falling from the ceiling. By this time, the gooey Titans are severely injured, but a final decisive boulder chases the "monsters" into a secret compartment. From here, they're sent out of the tower and into the ocean like mere skipped stones.

Seeing that the monsters are vanquished, Starfire and Cyborg stand tall and proud as truly accomplished adults.

The transcript for "Booby Trap House" can be found here.