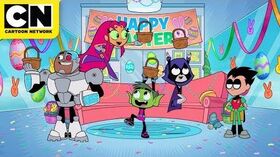 "Booty Eggs" is the twenty-eighth episode of the fifth season of Teen Titans Go!, and the two-hundredth-thirty-seventh overall episode of the series.

Not wanting to be creeped out on Easter, the Titans dispatch the Easter Bunny and take matters into their own hands.

It's Easter in Jump City, and Robin is decorating the Tower for the holiday. He then announces that it is time for the annual Jump City Easter Egg hunt and Starfire, Raven, Beast Boy, and Cyborg all get excited about it. The five of them talk about hunting for all the eggs, when suddenly there is a crime alert. It's the Easter Bunny, back again. The Titans' holiday spirit is crushed by this, and the Easter Bunny begins singing his famous Easter song.

The Titans are tracking the Easter Bunny, and Starfire announces that he is heading towards them. Suddenly, he disappears on the tracker and Raven says that she thinks that he might have left. But suddenly, he puts his grotesque face right up to the screen. The Titans all start freaking out. Robin tells them to get it together, and that the Easter Bunny's Easter creepiness must be put to a stop once and for all.

Soon, they realize that there will be no egg hunt as they have banished the Easter Bunny and begin to regret getting rid of him. But then, Robin gets an idea...they will make the eggs themselves, as they are determined to make sure Jump City has a good Easter. The rest of the team agrees, but then become a bit grossed out again when the top half of the Easter Bunny's egg lands on their robot.

In Titans Tower, the Titans begin dying eggs, one of which Beast Boy writes "ICUP" (an abbreviation for "I See You Pee") on and shows to Raven, who disapproves and punches Beast Boy with a big fist. Starfire eats one of the purple-dyed eggs and drinks the dye, which has Raven grossed out. But soon, all of the Titans have made eggs that are similar to the things that they are associated with and that they like: Robin's looking like a Robin, Starfire's looking like a cat, Raven's surprisingly decorated colorfully, Beast Boy's still saying "ICUP", and Cyborg's a bit like a mini version of himself. At first, the Titans are impressed with their work, until Robin realizes that it took them three hours to decorate the five eggs, and that at this rate they will never get all the eggs they need. Starfire claims that Robin is asking the impossible, but he then gets an idea that they could mix all the egg dyes together. Starfire, Beast Boy, and Cyborg excitedly agree with the idea, but Raven is unsure as they are playing with Easter forces they don't understand once again.

The Titans dress up in lab coats and wear goggles, along with Easter bunny ears of course to keep in the Easter spirit. They squirt all the different colored dyes into a big bowl and then dump all the eggs in there at once. A huge rainbow of colors comes out of the bowl, blasting the top half of the Tower off. But despite this, they now have tons of beautifully colored eggs and are ready to hide them.

Robin announces the Easter egg hunt, and everyone in Jump City excitedly races to find them all. Most of them are obvious finds, probably ones hidden by Beast Boy, but some are in the most bizarre places such as in a dog's mouth and in a manhole. Starfire, Robin, and Cyborg all tell Raven that nothing bad happened and that they proved her wrong. Until suddenly...Beast Boy screams that the eggs are starting to hatch!

The egg that Beast Boy is holding hatches, and out comes none other than a creepy, disgusting baby version of the Easter Bunny covered in green slime who creepily says, "Happy Easter, everyone!" The Titans are grossed out by the baby Easter Bunny, in which Starfire claims that they are supposed to be cute, in which this one is not. Suddenly...all the eggs begin to hatch and creepy baby versions of the Easter Bunny come out of all of them wishing everyone a "Happy Easter". They all start to chase the citizens of Jump City, who are now running and screaming, trying to get away from the creepy little monsters. The bunnies invade Jump City, from stopping in front of police cars and making them crash to terrorizing people in the streets along. Starfire says that they have released Easter creeps, and Robin tells Cyborg to "call it in". Cyborg mumbles gibberish into a walkie-talkie, and the Titan Robot appears once again!

Somehow, the Titans went from on the street outside the robot to being inside it, but aside from that, Cyborg gets Robin to do a "power stomp" again followed by another "rocket punch" by Beast Boy. But before the rocket punch can be done, baby Easter Bunnies invade the robot, and Cyborg freaks out. The robot throws up bunnies and then explodes.

The Titans are now out of the robot and take a moment to look at all the destruction the creepy little monsters have done to Jump City. Robin apologizes to Raven and admits that she was right, and Raven says angrily that she knows. Robin thinks that she is going to think that it is okay, but Raven, still angry, says that she told them to stop messing with the holiday and that she should listen to her next time. Robin, with a smile, says that he will consider it, but Raven's eyes glow red and she punches him with her big fist.

Starfire and the others think that this might be the end for a split second...but then out from the sky the Easter Bunny comes tumbling down, his cheeks flapping in the wind and giggling creepily. For once, the Titans are glad to see him. They beg him to fix Jump City and get control of the baby bunnies. The Easter Bunny says that first, they must promise to stop the holiday shenanigans, that he is the Easter Bunny, and adds with a creepy face to leave Easter to him. The Titans grudgingly tell them that they do promise, and the Easter Bunny giggles. He calls over all his "children" and tells them it is time to go home, and sings a reprise of his creepy song. The episode ends with one of the baby Easter bunnies hopping into the Easter Bunny's tail and the Easter Bunny creepily saying, "Happy Easter, everyone!"

The transcript for "Booty Eggs" can be found here.