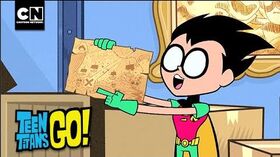 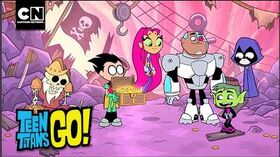 In order to save Titans Tower from some wealthy land developers, the Titans search for pirate treasure, but when the tresaure leads to something buried, they have to stop it in a race against time, before it runs out. Can the Titans have the lost treasure, or will they be stuck with 67 months of starving? Only one way to find out!

It's a normal day at the Titans Tower; Cyborg is exercising his wrist, Beast Boy is playing with marbles, Raven is reading a book, and Starfire is eating chips. But when they hear a shriek far off, Beast Boy looks through a telescope to see Robin waving at him. He informs the others, and they go down the elevator to see what he's all about. Robin is panting and horrfied about something supposedly really important, but Cyborg tells him that he won't open the fence up till he does the "Booty Scooty Dance". Robin reluctantly upholds the Titans' tradition and, I kid you not, twerks. Cyborg turns on music via chest plate, and the others sing along at this obscene dance. Cyborg feels Robin is shamed enough, and prepares to open the gate. Robin expects him to use the latch, but Starfire says that the complicated machine they've built will suffice.

Composed of an anvil, a balloon, a turkey, an egg, a flyswatter, a monkey, banana, target, light, bat, Batman, trampoline, and a football the machine is working fine until Batman messes up the task of hitting the bull's-eye with the football. Robin chimes in that those machines never work out in real life, so he resorts to just hopping over the fence. According to the hero and the paper, some wealthy barons plan to tear down the Tower and remodel the island into a shopping mall. Raven likes shopping and Beast Boy thinks it's cool, but Robin says it most certainly is NOT. Starfire asks how would they even stop them, as they have all the monies. The only way to beat money, Robin states, is with more money...

The group follows him into the attic, where past relics of their days lay about, such as a picture of Starfire's elder sister. Starfire wonders what they are looking for, so Robin shows her a map. Raven denounces it as just a dried up piece of paper, but Robin says it's an actual treasure map. Cyborg says the map must be worth a fortune, and Raven adds that the whole attic has value. Making money to save the Tower is Beast Boy's goal, and Raven proposes a yard sale. But a dangerous treasure hunt is what Robin has in mind for the team to gain cash. Beast Boy fears dying on the mission, and Robin confirms his fears. They head sown into the island.

Traveling on bicycles, they head down a steep road and into the island caves. A moan creeks out, and Cyborg asks what the heck that was. Robin explains that he keeps a creepy monster locked away here. Raven asks if he's telling the truth, so he proves it by opening a cell door. Inside is an unidentifiable Freak of nature watching TV sock puppets in a chained up chair. As the Freak spouts gibberish, Cyborg comments that he's nasty, which is the exact reason why Robin locked him up. Beast Boy inquires why he's so angry, and Robin can't tell why: he bought the most expensive chains, keeps the TV on all day, and keeps food barely out of his reach. Cyborg taunts that he's ungrateful, and Starfire adds that he truly is a monster. But Beast Boy feels sorry for the freak, and offers him a turnip from his pocket. Grumbling a little, the freak bursts into delight, knowing and sharing the food with Beast Boy. According to him, Freak is a good dude, but Raven finds him violent and unpredictable. Freak groans for another turnip, and when Beast Boy reports that he's out, the angered beast breaks from his chains and chases them Robin orders them to run.

Sprinting through caverns and puddles, they finally lose him behind some stone pillars. From an alcove, Cyborg spots a pirate piano composed of bones, which he's grossed out at. Robin, who has seen one before, informs them that they have to play the right notes to open the metal door. One wrong note (plays Davy Jones chord) will kill them (spike shoots up near Star). The task is stressful, Robin says, but one volunteer must play willingly. Surprisingly, the 4 Titans raise their hands promptly. Raven says they're all gifted pianists, and Starfire scolds that he would know if he came to their recitals. Starfire starts the song off with an upbeat melody, and Robin cheers her on. Cyborg and Raven join in on the song, but Beast Boy screws it up when he plays his fast-paced rhythm. The door slams shut, and spikes pop up all around Robin, impaling his cape. Beast Boy chills his beat, and the door reopens.

Through skull-stabbed tunnels and across unstable bridges (Beast Boy almost falls, but Cyborg catches him), they approach a rope ladder. Starfire wonders where it leads, so Robin answers the living room. Raven angrily tells him that they could've skipped the freak and piano, but Robin wanted adventure. Beast Boy yells he just wants the couch, and the other 3 agree. But Robin, a thrill seeker, goes on about treasure. Raven shoots back what about not DYING, so Robin gives a speech about the valiance of adventure down in the caves and the disgrace of living up there. Raven ignores his speech, so Robin speedily torches the ladder with his staff, the asks again who is with him.

Suddenly, Freak reappears, speaking his usually gibberish. Beast Boy moves in for a hug, but the other Titans manage to save him from Freak's not-so-welcoming arms. They escape along a stone bridge, which crumbles beneath their feet. Below it is a highly convenient rock water slide, leading out of a skull eye-waterfall.

After those treacheries, the Titans finally arrive in the treasure room. Multiple shipwrecks and shark skeletons litter the pirate hideout. Right in front of the Titans rises a humongous octopus. Robin theorizes that the beast might be another obstacle for the treasure. Raven points out that they're short on time, though, so they just head around him. The giant kraken is saddened by lack of action, but is comforted by a kiss from Starfire. Looking at the map, Robin gets all jittery when he spots the chest. A dead conquistador skeleton still grasps the chest, but Robin pulls it free. Jewels, gold, and pearls await the Titans, who all gasp in its glory. Beast Boy is excited for the diamonds, Raven and Cyborg favor the nuggets, and Starfire is captivated by the doubloons. Beast Boy announces their richness, and Cyborg joyfully says they can head out now. Robin, feeling bad for the skeletal Spaniard, leaves him with a ruby.

The decaying skeleton starts to glow, and his ghost comes out, blaring mad. The one gem he received was a slap in the face, but Robin claims he was just being thoughtful. The ghost asks what he's supposed to do with a single gem, but Raven says that, in all fairness, they thought he was dead. He confirms it, but adds that he was happy. Leaving him with just a single piece of booty was an insult, so he demands the treasure back from the team. Slashing the rope with his sword, another complicated mechanical device takes place, in which a rock catapults a skull on a mountain, which rolls and hits The Kraken, which then throws the skull. Once again, the target is missed, and the whole device is useless. Instead he just punches the sign, and they are spring-trapped out of Shipwreck Cove and into the bay of Jump City.

Back at the Tower, the Titans are moping over the lost treasure. Robin complains that he should have been more generous, and Cyborg woefully says he'll miss this place. Starfire says it's a shame they'll lose it to some despicable nobles... but Robin has an idea- sell the valuable pirate map! Raven points out that they thought of that before, and Cyborg yells at him for making them travel on a perilous quest. Still proud of himself for "thinking" up the idea, Starfire asks Robin if the Tower is safe then. Robin joyfully verifies her; they'll live there forever and ever. Strange moans once again are heard, and Beast Boy rejoices in seeing Freak again. Raven ponders why he brought him to the Tower, but like Beast Boy said, he's his best bud cause they both love turnips. But one small initiation must be dealt with, points out Cyborg, and that is the dance Robin did earlier. Freak complains, but it's Tower rules. Once again, the cybernetic hero turns on his chest plate music, and Freak is forced to twerk for the Titans' amusement. Beast Boy says he loves him. Freak shouts back in his distinctive moaning voice "That's wassup!"

The transcript for "Booty Scooty" can be found here.

Retrieved from "https://teen-titans-go.fandom.com/wiki/Booty_Scooty?oldid=428085"
Community content is available under CC-BY-SA unless otherwise noted.