Teen Titans Go! Wiki
Register
Don't have an account?
Sign In
Advertisement
in: Episodes, Season 3, Episodes focusing on all Titans,
and 7 more 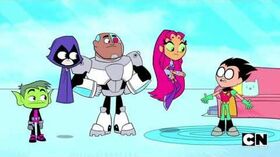 "Bottle Episode" is the twenty-ninth episode in the third season of Teen Titans Go!, and the one-hundred-thirty-third overall episode of the series.

The Titans are trapped in a giant bottle in their living room and spend their time reminiscing on their past songs, action, and injuries. Robin keeps telling it as usual, but accidentally gets injured in the bottle. Will the Titans get out of the bottle in time, or will they perish as usual and get stuck in there forever?

The episode opens with Beast Boy sitting on the couch, as per usual. Raven, Starfire, and Cyborg enter and inquire what "that" is. Beast Boy starts talking about his shirt, but they want to know about the gigantic bottle in the living room. Beast Boy says he located it just outside the Titans Tower. Robin comes in and is shocked to see the large bottle there, and he questions the other Titans on why it's in the living room. Telling him that they should all live the "bottle life", Robin gets annoyed by the idea and refuses for them all to go inside the bottle, and he plans on getting rid of it. However, while trying to lift the heavy bottle, Cyborg manages to get inside it, and everyone else (except Robin) enters it. Eventually, Raven manages to teleport them all inside the bottle.

When the five are stuck inside, Beast Boy somehow finds a way to get a cork and close the bottle, which completely baffles Robin. Getting agitated, the Boy Wonder tries to break out, while the other four Titans try to tell Robin that he should just relax and consider living in the bottle as the natural way of life. Robin decides to sing a "sea shanty" song, but the others are disgusted by this. They choose instead to take a look back at their songs about food, love, being cool in school, and a few others.

After the song "Fade Away", Robin interrupts the moment, suggesting that they keep on trying to break out of the bottle. The others start to tease him about him trying to escape, and he ignores this and tries to find a way to break through the Giga glassware. He got out a plunger that was attached to a rope, and he backs up to get ready to smash through. Robin sails at the cork foot first, but once contact is made, his bones are crushed into literal dust. Crying like a baby, Robin's leg is unnaturally bent and looks like a shriveled up balloon.

This causes the rest of the Titans to remember the moments when they hurt themselves, and again, a series of clips from older episodes appears that show all of them wounded. (And they all have the physical evidence to prove it - Beast Boy's chest is full of scars, Cyborg's brain is mushy, and Starfire's arm falls off.) At the end of the flashback, Robin hurting his leg is shown, despite it just happening. However, Robin manages to disrupt them, and he is held on Raven's cloak and tried to tell them to stop reminiscing. Of course, the others ignore him, and clips are shown once more.

In the end, Raven morphs them all out of the bottle because the time spent inside there was rather boring. They are all pumped up for another adventure, but wouldn't you know it; the episode ends!

The transcript for "Bottle Episode" can be found here.