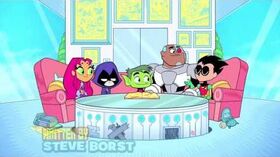 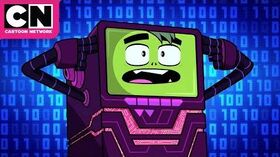 "Brain Percentages" is the twenty-fourth episode of the fourth season of Teen Titans Go! and the one-hundred-eighty-first overall episode of the series.

Beast Boy starts using more than 10% of his brain in an effort to find the hidden images in a puzzle.

Robin, Cyborg, and the girls gather in the living room, trying to solve a puzzle that involves searching for hidden pictures. They've already spotted the feather and beach ball in the camel humps, broccoli in the cloud, and the rocket ship at the side of the treasure box...until Beast Boy pops up and sees the hidden pics puzzle. However, he struggles to find the dolphin and keeps getting distracted by the already visible objects in the picture. Cyborg reminds him that he has never succeeded in these brain games and tries to convince him to play stupid video games, but unlike usual, he isn't swayed even though everybody hints at him. Unfortunately, no matter how he squints his eyes, he still fails.

Quickly, Beast Boy submits into frustration. To reassure him, Starfire informs him that it's his brain having the problem, though he denies it and believes that he needs to try a bit harder...with the lobes on different parts of his body. Robin disagrees and states that humans only use 10% of the brain, and Raven teases Beast Boy on only using 2%. Although Cyborg clarifies that the 10% brain theory is merely a misconception used by the television industry...and it's reasonable for Starfire to freak over learning the wrong knowledge from fiction! (Including a rumor that the 2003 Teen Titans are making a comeback for Season 6). Anyway, Beast Boy interprets that he will be able to do the puzzle if he uses more percentages of his brain, and since his friends are terrified that his brain is super shriveled, he knows that it's time for it to get some strenuous training!

Later, having acquired 10% of his brain, Beast Boy decides to rename himself "Renaissance Boy," which Starfire admires. However, he still can't find the dolphin in the picture book. He conspires to get more percentages, but Robin states that he's at 2%, which is the maximum amount a person can use. Nevertheless, Beast Boy's determined to unlock his brain's true potential.

Later that night, The other Titans are laughing at a joke Cyborg made, but Beast Boy insults him, saying that he's always using it to hide the painful conflict of his soul and calling him a misfit of the human race, thus making him run off crying. Starfire wonders why he's being cruel to him, to which he explains that he's using 50% of his brain, so he's got some deep insights about people. He also soon insults Robin, Raven, and Starfire, making them cry and run out of the kitchen. Cyborg wonders why he is doing this, and Beast Boy says it's so that he can solve the picture book puzzle, only to once again fail at doing so. The others are worried that he could manage to unlock 100% of his brain, so Cyborg comes up with a plan to get him back to his old dumb self.

In Beast Boy's room, Beast Boy is meditating until he is interrupted by Cyborg with a TV screen, who suggests playing some video games. But he refuses because he does not want to lose all his brain percentages. The others say that they love him the way he is, but he says that he using 80% of his brain, which makes him hover and do a coin trick. However, it's not enough brainpower. So Beast Boy decides to do the unthinkable: Go back in time 650,000,000 years into the past and touch fingertips with a monkey. After doing so, He tells the others that he's using 95% of his brain and he's going to turn himself into a computer. That's when a transformation sequence occurs, and he tells the others that if they were him, they'd touch fingertips with monkeys and be computers too. Cyborg tells him to stop, but he refuses and says that he's about to reach 100%, thus destroying reality. The Titans try to stop him, But it is too little too late, as he reaches 100% and teleports them and himself inside the picture book so that he can find the pictures. Cyborg urges him to restore reality. However, Beast Boy claims he won't until he can finish the puzzle. He finds almost everything in the picture, except for the dolphin. The Titans try to tell him the dolphin is on the palm tree. However, he once again refuses to listen to them. Therefore, the dolphin slaps him in the tail, which makes him see it, though he retorts that they should make these games harder, much to the other Titans' confusion. With that, they are teleported back to reality. Raven wonders what Beast Boy will do now that he has the unlimited power of his brain, but it turns out he hasn't thought that far ahead until he finds a maze puzzle, much to the other Titans' cringe.

Sometime later, the Titans are now in the maze made of cheese, unable to get out despite it being simple, all thanks to Beast Boy's stupidity. The episode ends with Cyborg thinking that he and the others are never getting out of the maze.

The transcript for "Brain Percentages" can be found here.