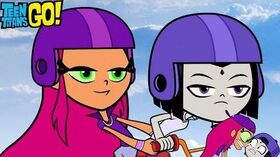 When the male Titans are injured, Raven and Starfire must become bros to stop the Bro-pocalypse.

It's a normal day with the Octopus doing some weight-lifting. The scene switches to the Tower, where Robin, Beast Boy and Cyborg are doing the same (but more extreme) as part of their bro-out. The three boys soon show off their pumped-up muscles and wolf down some burgers, disgusting Starfire and Raven. Raven tells the boys to use a napkin to clean themselves, but Cyborg refuses because he thinks if the burger doesn't make lots of drips, it doesn't belong near his lips, and Robin agrees before munching up his own portion. When Starfire asks them how long are they going to continue their bro-out, Beast Boy answers they are going to do that for the rest of their lives and sticks out his tongue in front of the girls. The boys proceed to proclaim themselves "bros" by slapping one another and farting together, which annoys Raven even more; she scolds them by telling them to bro-out somewhere else. Her words make Robin slightly irked as he thinks she's disregarding their efforts saving the world. Starfire is puzzled and asks the boys what danger the world must be saved from, to which the boys reply, "the Bro-Pocalypse!"

Cyborg explains that every two thousand years, the Bro God sends down an intergalactic fist bump from above to the top of Mount Bro-suvius, and Robin adds that the ultimate bro has to reciprocate it, which Beast Boy describes it as "super sick". But Cyborg warns that if the Bro God is left hanging, he and the other boys state that he will bring down the Bro-Pocalypse: something that will cause backward hats, popped collars and puka-shell necklaces to cease to exist. Instead of feeling shocked, both girls look forward to that day and Raven still thinks the boys are joking, even though Cyborg reminded them earlier that the world will be destroyed (a scenario which includes screaming Jump City citizens and the Earth exploding when the bro fist crashes). Seeing as the girls don't believe them, Robin tries to prove he and the two other boys can rescue the world from this apocalypse by doing one last power-lift, and after spitting saliva onto his hands, he lifts up the heavy dumbbell with all his might. Unfortunately, Robin ends up cracking his leg and getting his head clamped by the weights, while his bros also have their legs injured when the dumbbell crashes; Cyborg yells, "Worst case scenario!". Robin encourages his bros to walk it off, but as they stand up, they instantly collapse and cry loudly in pain. Beast Boy says they can't walk and Cyborg pessimistically believes they won't be able to prevent the Bro-Pocalypse.

The girls are indifferent while watching the boys shout in fear, and Raven is happy to consider their injuries the end of their "dumb bro ways", since there will be no more backward hats, extreme sports, or getting food all over their faces. Starfire agrees that hats should be worn frontwards (she switches the boys' hats upfront in the process). She also claims to prefer mild sports and angrily wipes Cyborg's mouth with a napkin while calling him "the shameful". Beast Boy opposes the girls' ideals by stating that it ain't a world worth living in, and Robin agrees, adding that if they can't overcome their injuries, there won't be a world to live in; he sheds a single tear at the idea. Raven still doubts the boys' account of the world ending because they can't get to the top of a mountain, but Starfire suddenly alerts her that a magnetic disturbance is coming from a mountain range. The injured boys crawl with difficulty, and emphasize that the mountain is named "Brosuvius" (before their pain worsens), although Raven points out that it's St Antonio. Starfire realizes that, if the disturbance is not dispersed, the world will really end. Despite this, the girls still cannot accept the nature of the upcoming crisis. Robin assures he and his bros can handle it, but the boys haven't recovered from their injuries. He, Cyborg, and Beast Boy moan in pain; the girls roll their eyes. Referring to the guys as knuckleheads, Raven then tells them to stay down as she and Starfire will handle it. Beast Boy says they aren't bros, but Starfire and Raven ask if one simply needs to dress in Don Cornelius clothes and just call each other "bro" all the time, respectively. Cyborg affirms it will take more than that to become "the ultimate bro".

Both girls have changed into T-shirts and shorts, as well as necklaces and backwards caps. They behave like bros unnaturally: they try to call each other bros with hand gestures, Raven awkwardly compliments Starfire's "sweet chain wallet" and asks "cares to catch some waves, brah?". Starfire sniffs Raven's armpit while the latter is pretending to dunk a hoop and acting like a guy who "flirts" with the "chicks" while asking "What is up, the man?". Starfire attempts to eat burgers messily, describes Raven's odor as "pungent" and misinterprets "chicks" as chickens. Nonetheless, Robin still considers their efforts a start (though not as easy as popping their collars), while Beast Boy remarks one needs to be a bro from the heart, and Cyborg hands the girls a "Bro Journal" which can guide them through their journey. Robin then wishes the girls luck and along with his bros claims that "a bro is no bro without bros". The girls shrug and Starfire doesn't know it means, though Cyborg stretches and extends his neck saying that both will soon understand. Raven pulls his neck (causing his head to spring backwards), and tells Starfire, "whatever". She opens a portal which teleports her and Starfire away, leaving the boys in the living room.

The girls arrive at the bottom of the mountain faster than a flash, and they are immediately met with blazing sunlight shining from above. They reflexively react by blocking the light with their arms. When Raven complains about getting a sunburn, Starfire advises her to pop up her T-shirt's collar. Upon noticing her burn, Raven follows Starfire's advice, with popped out words referring it as "sun bro-tection". She then thanks Starfire for protecting her from the sun's harmful rays with a bump; Starfire replies with "No the problem, the bro" and returns the gesture. The girls carry on their journey, and they soon discover an entrance shaped like a bro behind some grass. Starfire realizes it's a dead end, but when Raven reads, "to get past the face, get it all over the place" from the journal, there is a sudden rumble. As they jump away, a humongous burger appears in front of them. Raven finds out it's the ultimate bro burger; Starfire points out it has an excessive amount of meat, cheese, and bread. Raven supports her friend by giving a fist bump and flies swiftly with the latter; the two eat the burger in a messy manner, stuffing their stomachs full and pass the trial effortlessly. The entrance opens with glowing eyes and burps, which delights them. They say "sick, bro!" in unison, before levitating into the cave.

Meanwhile, Robin can't contact Raven with his T-Communicator, and guesses something must have happened to the girls. Beast Boy and Cyborg dismiss their ability to tackle the upcoming plight, while Robin wishes there was a way to heal their leg injuries. Beast Boy remembers learning a massaging method while watching a movie. Changing his hat into a headband, he uses this massage to mend his bros' legs. Robin is surprised with its effects and Cyborg exclaims that his knee is feeling "bro-tastic". Now able to stand up, the boys happily fist-bump one another, only to fracture their hand bones, which causes them to shriek woefully.

The girls are now inside the cave, and there they face a large statue of two lions and a bro with caps on their heads. The girls look for the inscription, but Raven is still confused after reading out the Latin words. Starfire states that according to the journal, it is the first bro who did the fist bump with the Bro God. Raven is precise to notice that something isn't right with one of the stone lions' cap, so she decides to "chickity-check" it, and switches its cap from forwards to backwards. Abruptly, this triggers the statue to move and another exit appears. Though they are uncertain, the girls fist-bump and leave the cave. Little do they expect the sight which greets them as they exit--a long range of bicycle track in front of them, with a fire ring above a pit of crocodiles and tons of spikes awaiting them. Raven finds this extreme and Starfire agrees that it's not mild at all. As Raven reads "the way forward will open for the bro with the sickest jumps", Starfire encourages her to act by putting bike helmets on their heads. They leap onto their bike seats, with Raven at the front and Starfire at the back. On their subsequent bike ride, the girls have an exhilarating time; they pass through the ring of fire, despite a crocodile biting the back tire. As the girls make silly faces, Starfire is impressed by Raven's ability to ride the bike without holding the handles; she later covers Raven's eyes for fun. Just before the girls arrive at their destination, the bike chain unexpectedly breaks, much to Raven’s horror. Starfire reassures the former and quickly replaces the broken chain with her necklace, allowing the girls to pass the spike-filled void, and they give each other a fist bump and merrily chanting “Bros!” four times.

The boys aren't quite so fortunate as time is running out; they've got more fractures and Beast Boy's broken hands can no longer massage or heal. To motivate his bros, Robin mentions how Tiger Woods won the US Open with a hurt leg and knee. The boys manage to stand up, but their triumph is short-lived after the three chest bump. The boys resume groaning; Beast Boy mourns his heart.

The girls have finally reached the freezing top of the mountain. Raven becomes anxious watching the fist come to Earth from above, so Starfire tries to help her with "a bro is no bro without bros". This doesn't help solving Raven's anxiety as she doesn't know which of the two is the ultimate bro. Starfire passionately tells Raven she has fully annihilated the mission, but hearing how she continue to doubt her own efforts, Starfire shouts back that she's the ultimate bro. Raven obliges and decides to give a shot, but her bump is weak and instantly disappears. As the fist comes closer and closer, Starfire says Raven's effort isn't poppin' off and Raven moans over her failure, gloomily declaring that they're doomed and at least they'll be crushed TOGETHER... At this very moment, Raven realizes the hidden meaning of "a bro is no bro without bros"; she and Starfire as a pair are the ultimate bros. They take each other's hand, sending out a gigantic joint bump, which finally repels the Bro God's fist.

After their achievement, the girls relax on the mountain top. Raven expresses how she has changed her mind of being a bro while fixing her collar, and Starfire expresses the same. The two share one last fist bump when Robin suddenly pops out of nowhere. The boys climb and meet the girls, unintentionally sabotaging their fun by obliviously announcing themselves as the ultimate bros. Raven decides it's better NOT to be a bro, and Starfire concurs. They toss away their caps and necklaces and silently float down the mountain, abandoning the boys behind as clouds slowly cover the screen.

The transcript for "Bro-Pocalypse" can be found here.