The Ghosts of Black Friday Present

Buster is a minor character that made debut in "Black Friday" episode of Teen Titans Go!. He is a small, magical talking price tag capable of giving out sales. He is voiced by David Kaye.

After Starfire said that she would partake in Black Friday he appeared. He is a price tag with a cowboy hat and boots. He gave the Teen Titans 99% off everything because they figured out the true meaning of Black Friday. 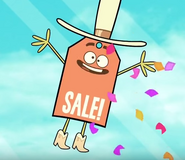 Add a photo to this gallery
Retrieved from "https://teen-titans-go.fandom.com/wiki/Buster?oldid=410631"
Community content is available under CC-BY-SA unless otherwise noted.