Chemical X offspring of sugar, spice, and everything nice

Hey, we are superheroes; not babies! Got it? I'm Buttercup and that's Bubbles and Blossom.

Buttercup was accidentally created by Professor Utonium, a scientist striving "to create the perfect little girl". He combined sugar, spice, and everything nice. However, during the experiment, he accidentally spilled a mysterious substance called "Chemical X" into the mixture.

As a result, Buttercup and her sisters, Bubbles and Blossom, were created and granted a wide variety of powers and abilities, that she uses to keep Townsville safe from any evil.

Buttercup has short, black hair in a flip cut. She has huge, lime green eyes and wears a lime green dress with a black stripe in the center with white tights and shiny, black shoes.

Among the Powerpuff Girls, Buttercup is the most tomboyish and aggressive, usually having an angrier disposition in comparison to Bubbles and Blossom. However, she happens to be somewhat of a troublemaker; she enjoys fighting villains and criminals and despises girly things like skirts and scrap-booking.

Buttercup would rather hang out with the Ganggreen Gang, a gang of five teenage hoodlums that are green-skinned and unhealthy-looking. She really enjoys playing death ball with them and is considered a very good friend with them. In particular, Buttercup hates being called "princess", as she will fly into an annoyed rage at any who calls her such. 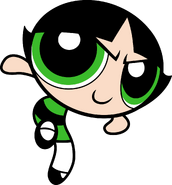 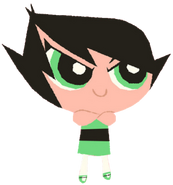 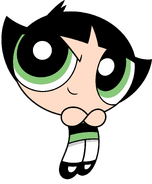