Some of Their Parts 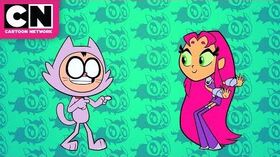 "Cat's Fancy" is the first episode and season premiere of the third season of Teen Titans Go!, and the one-hundred-fifth overall episode of the series.

When Starfire only expresses her intense and close affection to a cat, Robin realizes that the only way Starfire will ever notice him is if he turns into a cat. Unfortunately, his plan for love and affection didn't work out as he'd planned.

The Titans try to stop a bomb from Dr. Light and end up making a horrible argument. Desperate to help out, Starfire carries the bomb up into space but does not make out in time. She falls and hits the ground, knocking her into a coma, and Robin, who tries to get her to wake up, starts to cry. After finding out that she is okay, he tries to tell her about how much he loved her. While professing his love for her, however, Starfire asks if he saw the kitten behind him, and she picks it up. Back at the tower, Starfire is playing with the kitty and calling him Nibbles, so Robin concludes that the only way Starfire will love him is if he is a cat, while Beast Boy says a dog would be better. Cyborg tries to tell Robin that how he can become a cat is by wishing a shooting star. Taking Cyborg's advice he sees the star and makes a wish.

The next morning, Robin thinks he has become a cat, but Raven, Beast Boy, and Cyborg start to laugh, revealing that it was just a prank and he was wearing cat gloves. Robin says the star didn't work, but Cyborg reveals that a shooting star doesn't turn people into cats. But Robin tells them that their joke is not going to stop him, and he kicks them out of his room. Beast Boy tells him that he's not going to win Star over by using whiskers or becoming a cat. The next day, Robin dresses as a cat using a costume. Starfire sees Robin dressed as a cat and tosses the kitten she had and names him "Sassypants" When Raven asks Starfire if she knows it is Robin, Starfire says she does, but also admits that she likes him better as a cat now and has "Kitty Fun Times" with him which he thoroughly enjoys. Raven knows that Sassypants does nothing but sleep and eat. As for Cyborg, who makes lasagna, Sassypants kicks Beast Boy who is in the form of a dog, and eats the whole lasagna and reveals that he hates Monday.

Meanwhile, Raven, Beast Boy, and Cyborg tell Starfire that they have to get rid of Sassypants but Starfire responds that she is going to move into an apartment and they can't believe that his plan has worked. Several months later, Starfire brings more kittens into her apartment. Another several more months later, Raven, Beast Boy, and Cyborg urge Starfire that she has to come back. Raven orders Sassypants to come over, but Sassypants doesn't listen until Cyborg lures Sassypants with a yarn ball. Beast Boy warns that Starfire has become a "Cat Lady" because of him, but Robin doesn't care. Raven scolds Robin that if he cares about Starfire at all, he'd take off the catsuit, but he refuses and says that he's hopeless, so the three others leave.

Later, however, Sassypants realizes the others are right about that his becoming a cat has made Starfire love him in the wrong way and tries to get rid of the cats. Robin, therefore, dresses himself up as a puppy and gets rid of the kittens. Starfire comes back with her cat food, and then she gets hit by a can. Starfire slowly reads the can and realizes they have all ran away. She cries for her kittens when Robin (dressed as a puppy) barks. She sees the new puppy, and she is turned back to normal, losing her sweater and changing back to her normal clothing.

Outside in the fields, Starfire and Puppy (aka Robin) are playing fetch the ball, and Raven considers that living with pets can be a long dawn. While Raven says so after tossing the ball away, the audience can hear a car screeching, and a dog barking, implying the puppy (a.k.a Robin) gets run over.

The transcript for "Cat's Fancy" can be found here.