Catwoman (Selina Kyle) is a thief in Gotham City. In Teen Titans Go!, she is a minor character who made her debut in "The Inner Beauty of a Cactus".

Catwoman first debuted at the end of "The Inner Beauty of a Cactus", accompanying Killer Croc and The Penguin to attack Raven and the male Titans.

She later made another appearance in "Mo' Money Mo' Problems". This time, she accompanied The Joker, Poison Ivy, The Riddler and Penguin to invade and rob Wayne Manor, stealing one of the clocks and even easily beating up the Titans (namely using her whip to cause Raven to fall from the air). But in the end, they were no match against Alfred Pennyworth, as Alfred hit her in the eye with his teacup.

In "TV Knight 4", she was trying to run away from her crime with a bag of loot when she ran into Batman and Commissioner Gordon. After unable to satisfy them with a diamond and a burger, she gave them a large television and watches the show about the Mockingbirds, Flex and Muscle, as well as a Secrets of Eternity episode, until Alfred threw a boot at her head. To retaliate, she stole a fish from him and they had a chase, until they ran into a fierce bear. Fortunately, Batman saved them by feeding pretzels to the bear, and they all watch TV together.

In "Bat Scouts", Catwoman was playing chess with Poison Ivy when Cyborg, Beast Boy and the female Titans trespassed into Arkham Asylum and chased them off. Later in Gotham City, she heisted a diamond necklace from a jewelry store. Being an adept criminal, she effortlessly beat up the Titans (except Robin) offscreen. Nonetheless, she and the Penguin are intimidated by Beast Boy and they carelessly tripped over a fainted Joker and slammed themselves onto a street light pole. She and her cohorts ended up being teleported back to the asylum. 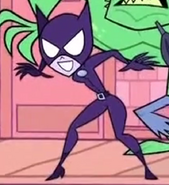 Add a photo to this gallery
Retrieved from "https://teen-titans-go.fandom.com/wiki/Catwoman?oldid=398849"
Community content is available under CC-BY-SA unless otherwise noted.