Chapter One: I Saw You Dance

Chapter Two: The Story in Your Eyes 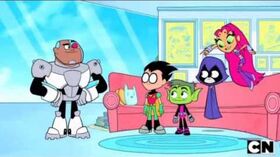 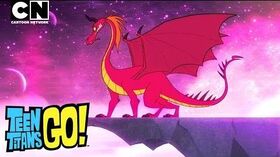 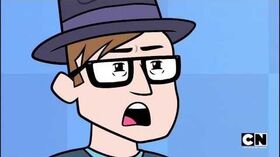 "Chapter One: I Saw You Dance" is the first part of the special series The Day the Night Stopped Beginning to Shine and Became Dark Even Though it Was the Day, the twenty-seventh episode of the fourth season of Teen Titans Go!, and the one-hundred-eighty-fourth overall episode of the series.

Cyborg becomes trapped in the alternate reality of Night Begins to Shine with a dragon who wants to steal the song for his own evil purposes.

The Titans are seen in very radical vehicles, taking in the surrounds of the Night Shine dimension. While they are talking about the song, an Evil Dragon sneaks up on the Titans and destroys their vehicles. The Evil Dragon demands that Cyborg release the song to him. He refuses and the Titans fight against the dragon.

The Evil Dragon then tears open a portal the returns all the Titans but Cyborg to their own dimension.

Back home in the tower, the Titans decide that the only way they can return to rescue Cyborg is to convince famous musicians to recreate the songs magic. They try to first ask CeeLo Green for help, but are thrown out by his bodyguards. They then try asking Fall Out Boy. The only member of Fall Out Boy who seems to be interested in "magic songs" is Pete. But the rest of the band decides against helping the Titans.

Meanwhile in the Night Shine dimension, Cyborg tries escaping from the Evil Dragon, riding on the back of a giant wolf. He ends up thrown off the wolf and is eaten by the dragon for refusing to relinquish the song.

The transcript for "Chapter One: I Saw You Dance" can be found here.

Retrieved from "https://teen-titans-go.fandom.com/wiki/Chapter_One:_I_Saw_You_Dance?oldid=420127"
Community content is available under CC-BY-SA unless otherwise noted.