Scott Menville
Cinderblock is a villain in Teen Titans Go! who first debuted in "Staff Meeting".

In "Staff Meeting", he appeared when Robin was fighting him, but Robin was very depressed over the loss of his staff, so he wasn't very effective in hurting Cinderblock. Annoyed, Cinderblock eventually punched Robin, sending him flying.

In "Artful Dodgers", he goes in a dodgeball team called the BlockHeads, but is defeated by Robin later.

In "Starfire The Terrible", Cinderblock is in a giant area, destroying trains. Robin then defeats him with his motorcycle.

In "Legs", Cinderblock is briefly shown getting beaten up by Raven as Lady Legasus.

In "Man Person", Cinderblock is facing a battle against the Titans, and Beast Boy insists on fighting, but gets hit by his punch. Cinderblock's hand is later seen on Beast Boy's face after the collision.

In "Vegetables", Cinderblock is used as a test dummy to show the Titans what they could do if they ate vegetables.

In "Multiple Trick Pony", Cinderblock is seen destroying Jump City, while the Titans (except for Robin) fight him with Kid Flash.

In "Animals, It's Just a Word!", Cinderblock is seen getting defeated by Raven along with her new "sewer friends" the Mutant Alligator and the Mutant Rat

Cinderblock is a giant rock monster composed of grayish-purple-colored stone bricks. He has massive rock arms, legs and an immense rock chest. He has a giant brick head with red eyes and a mouth. The stature of Cinderblock is similar to that of a robot's. 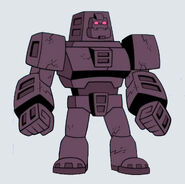 Cinderblock in The Cape.