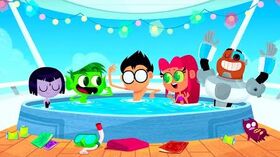 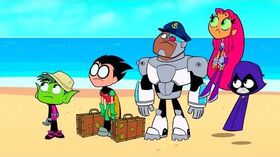 "Coconut Cream Pie" is the forty-first episode of the third season of Teen Titans Go!, and the one-hundred-forty-fifth overall episode of the series.

The Titans are shipwrecked on a deserted island and must use the island's resources to survive.

After the exclusive Island Adventures theme song, Part 1 of the Titans' marooning begins. The team comes back to consciousness on their fractured yacht, which was destroyed by a powerful wave. Robin sees that they're shipwrecked on an abandoned isle, and he calls out to make sure the others are okay.

Only three of them reaffirm him, and Beast Boy starts worrying when he hears Cyborg calling out for help. It turns out he wasn't drowning, but Beast Boy throws a life preserver out at him anyway. Annoyed, Cyborg yanks Beast Boy off the ship with the rope. Cyborg explains the fact that he's on a beach, and when Beast Boy remarks by saying it was cool,

Cyborg slapped him on the head with his skipper hat. Starfire admires the hat, and Beast Boy also pulls out his rainforest hat, saying they provide excellent sun blockage.

Raven has enough fun though, and she tries to leave through a portal, but she instantly face-plants. Starfire tries flying out, but she just ends up nowhere. Robin theorizes that everyone except for himself can't utilize their powers because they're deserted.

When asked for a more logical answer by Starfire, he tries to blame it on a Bermuda Triangle thing. Raven goes with it, and so it's off to work; Robin starts spouting off on how to build a shelter out of the foliage. Beast Boy, not being that scientifically advanced, tags along with Cyborg to gather bamboo, and Raven is tasked with retrieving coconuts.

The reality of the situation starts to get to her though, and she starts going crazy and somehow starts having fondness with coconut cream pies with creepy playful background music. Starfire, however, is exempt from working, because Robin feels that a movie star like her isn't low down enough for labor. She just has to take it easy in the shade with two rich passengers from the boat.

A brief construction montage follows, in which the Titans start hanging bamboo frames and fusing coconuts. Starfire relaxes nearby in her bikini while Cyborg uses Spanish "instrucciones". Beast Boy attempts to screw on coconut, but his whole contraption falls apart. Raven is busy making her pies with the strange grin upon her face again.

Beast Boy tries to help Cyborg again, but instead, he accidentally pins Cyborg in the butt with a nail, and because of this, Beast Boy got slapped by Cyborg's hat again. A few more leaves later, and finally, the Titans finish the crude, but livable, new Bamboo Titans Tower.

Coconut-themed programming is being streamed on the Titans' new jungle TV, with comedy, football, dancing, all starring coconut people. The Titans enjoy the new set, Raven especially, and Cyborg inquiries about how Robin even made it.

Once again, he starts spitting incomprehensible words about ionization and bamboo wiring. Robin even made a coconut remote for the TV. The coconut news on TV starts talking about coconut stocks, and then it’s the latest from President Coconut. Cyborg switches the channel though, and Beast Boy's sad because he'll miss the speech from his favorite president. Cyborg says he's just flushing the coconut country down the coconut toilet... a lot of coconuts.

Robin changes the topic to how they're gonna escape the island. They have the resources, but the only problem is fuel. Cyborg tasks Beast Boy with gathering more bamboo. When he's leaving, Raven tries to coax him into eating her coconut pie. Beast Boy worriedly declines and heads out, all while Raven is still rattling on about her pies.

Merrily singing while chopping down bamboo as an elephant, rhino, and gorilla, Beast Boy uncovers a convenient drum of rocket fuel. However, he doesn't realize what it is just yet, because reading "fuel" takes him a while. Once he finishes sounding out, he excitedly takes the drum of fuel but misses a warning sign, that was designating that section of the isle as an "unstable fuel drop-off".

Back at the jungle Tower, the others are enjoying a coconut drama. Cyborg remarks he knew the two would be together as a couple of the fruits touch lips. In comes, Beast Boy with his oil drum, and Raven asks if it's really rocket fuel. He confirms her, slapping the barrel.

A low rumble is emitted, and Robin proposes that it could in fact power a 100-ton rocket. Beast Boy keeps jiggling the marked DO NOT SHAKE drum, and Starfire asks if it's safe to be inside the Tower. But he's confident it's fine, kicking it for good measure.

Green ooze starts spurting out though, and Robin screams in panic. They all take shelter behind the leaf couch, but Beast Boy's a little slow to realization, so Cyborg has to pull him along. He's about to slap Beast Boy with his hat again when Robin stops him. It's a great find, hopefully, great enough to fly them back to Jump City.

Cyborg instead congratulates Beast Boy, and a title card says "He Did It Again!" with Beast Boy poking through a life ring. The only thing they needed was a rocket. Cyborg and Beast Boy (as a beaver) hop to it, asking what Robin will need. There are the usual bamboo and leaves, but Raven chimes in with her coconut cream pie. Coconuts are added to the list, and Robin makes sure to inform them that the rocket can't be too heavy: there's only one drum of fuel, so no unnecessary weight.

The rocket is in progress, and Beast Boy is finishing it up with a poor nail job. Starfire flies in with a pink animal skin, trying to flirt Beast Boy into making room for a wardrobe for her exquisite clothes. Beast Boy tries to object because of weight issues, but she presses, saying she can't be seen in the same dress. He gives in when she starts raging, and just like that, a stocked closet is added to the blueprints.

Raven pops in via portal, eerily asking for an oven to make her world-famed pies for the road. Severely creeped out, Beast Boy pushes her out, agreeing to her request, but shaking his head disgustedly. After he installs the oven, the two millionaires from earlier approach him, and Beast Boy can only guess what they want. After the installs first-class seats, and later an aquarium, disco ball, stairs, beanbags, a telescope, a reading lamp, and a bear rug, Robin and Cyborg walk towards the rocket, seeing him finishing up the first-class section to their exasperation.

Robin angrily asks Beast Boy if he knows how much the chairs weigh. When Beast Boy says not even half that of the oven, Robin loses it. Raven all of a sudden enters with her pie, and Cyborg clobbers Beast Boy because of his failed job. Beast Boy says he was just trying to make everyone happy, and still Raven remarks that coconut pies make people happy. Cyborg orders all of it cleared out, as well as lunch for him and Robin.

After throwing out the last piece of trash, Beast Boy sees his final task---a red launch button. But he has a problem reading it, and he settles that it gives lunch. After pressing the bright red button, an alarm sounds, and a timer starts counting down. Beast Boy, pleased with his good work, heads out to greet the Titans.

There'll all packed and ready to go, but Cyborg asks where the Titans' lunch is. Beast Boy says it'd be there in 10 seconds, which confuses Robin. Beast Boy explains the "lunch button", and Robin freaks out, explaining to him that it was a launch button! The rocket takes off from the island, and Beast Boy cracks a joke about no lunch. He's about to be slapped with Cyborg's hat again when the bamboo rocket spontaneously explodes.

The Titans gasp and Starfire soon faints. Robin deduces that the fuel must've been unstable. Cyborg figures they all would have died, so he exclaims that Beast Boy's done it again, and Beast Boy gets a "That's How He Do!" title card. All of them cheer, but suddenly, Raven throws pies up in their faces. Beast Boy licks the coconut cream, and he announces that he likes it. Raven happily states that she told him, and the episode ends with Raven's awkward grin.

The transcript for "Coconut Cream Pie" can be found here.