Commissioner Gordon is minor character in Teen Titans Go! who made his debut in "La Larva de Amor", as a cameo. He is voiced by Eric Bauza.

Commissioner Gordon is a recurring character in the series. He is often seen with Batman. He made his first appearance in "La Larva de Amor" where he was seen fishing with Batman on a boat while Silkie was floating by. He then made a second appearance in "Girl's Night Out" where he was seen drinking coffee and laughing with Batman in a police car, just before Jinx, Starfire, and Raven whooshed passed them, but then they returned to their laughing. His third appearance is in "Sidekick" where he is seen enjoying the ultimate Batarang with Batman, both of them laughing similarly to how they did in Girl's Night Out and he made his first season three appearance in "The Cruel Giggling Ghoul". His voice actor is currently unknown. Due to this being the comical version of DC Nation, every time he is shown, he appears very lazy, laid back and comical.

Batman is good friends with James Gordon as the two often spend time together which include fishing, relaxing in a squad car, and watching the Ultimate Batarang's fireworks in the night sky. During these, they seem to be have a good time as noted by the amount of laughter they share. Gordon also spends some time at Wayne Manor. 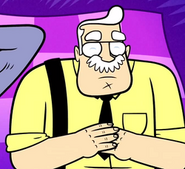