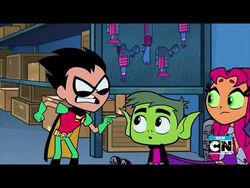 When the Titans run amok in the Tower's evidence room, Robin does everything he can to keep things under control.