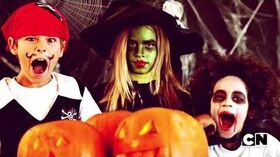 Tired of losing to the H.I.V.E. Five every year, the Titans hatch a scheme to win the costume contest.

The episode starts with Beast Boy entering the tower, the Titans decorating the Tower with Halloween decorations, Raven is bringing a box full of decorations supplies when Beast Boy interrupts by scaring her as a bat. Raven slaps him with an insect racket. He apologizes and says he's so excited about this year's Halloween.

It's not just Beast Boy who's excited, everybody is. Starfire loves the candy, Cyborg loves the spooky decorations, Raven loves the costumes. Then, Robin says that they're ready for this year's costume contest. Everyone's excited. Robin has prepared some ideas for the contest, dressed as Scooby-Doo, The Wizard of Oz, and Suicide Squad.

Then, there's an incoming call for the Titans. They answered. No one is there, then the HIVE jumpscares and freak the Titans out. Then, the HIVE make fun of the Titans. The Titans then realize how cool their costumes are at the past costumes. The Titans are afraid they'll be humiliated. Then, Robin slaps them and ask them to think for ideas.

Later, they think what costume should they wear as. Beast Boy suggests being a ghost, Raven suggests they should dress up as the HIVE. Robin says it's a good idea. So, the Titans try sewing the HIVE's costume but soon fails. They then quickly think of a new plan to steal the HIVE's costumes instead.

They went to the HIVE Tower about to steal their clothes, soon discover their tower is creepy. Then, after they find their clothes, they put them on.

The transcript for "Costume Contest" can be found here.