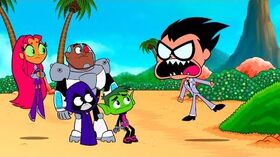 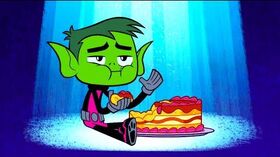 "Crazy Desire Island" is the forty-fourth episode of the third season of Teen Titans Go! and the one-hundred-forty-eighth overall episode of the series.

The Titans are still shipwrecked and Robin grants the other Titans their crazy desires.

The episode begins with Cyborg talking to "Football with a Face On It," who are then joined in by Beast Boy, "Hockey Stick with a Face On It," Raven, and "Basketball with a Face On It". However, Starfire rushes in and tells the group that talking to sports balls with faces on them is a sign of madness (as told to her by The Skull of the Pirate Volleyball Player with a Face On It). The Titans agree with her and realize how crazy they've gotten. After throwing their sports ball friends into the ocean, Raven exclaims how she wishes they were back on the island. As if on cue, Robin appears from a bush in a suit and introduces the audience to Crazy Desire Island. After questioning his behaviors, Robin tells the group that all wishes they had can be fulfilled by hopping into the bush. Anxious to try it, Cyborg wishes he and Beast Boy were famous musicians and jumps into the magic bush.

In his wish, Cyborg and Beast Boy's song become a huge success. Unfortunately, Beast Boy betrays him and states that he was only using Cyborg just for fame. Robin appears in his wish and points out the betrayal. But Cyborg continues to encourage and cheer for him. Feeling he refuses to learn anything, Robin ends Cyborg's wish and sends him back to the real world.

Back in the real world, Starfire hops into the bush to fulfill her wish.

Her wish involves her becoming a magic cat, to Robin's confusion. However, her dream also involves her summoning a cat party inviting every cat in the galaxy. Disgusted and utterly terrified, Robin immediately ends her wish.

Back on the island, Beast Boy states that he simply wishes for cake. Confused and annoyed, Robin fulfills this wish for a few seconds, but immediately sends him back out of total annoyance.

Finally, Raven wishes to be back home in the tower. In her world, her dream is fulfilled, but she is also immediately annoyed by her obnoxious roommates and their antics. Admitting her desire to be back on the island, Robin rejoices to state he finally taught them a lesson. But before he can send her back, the Starfire from Raven's world admits her feelings for Robin, and the two begin to kiss and start a relationship, just before Raven ends the dream herself.

A crying Robin is brought back to the island, begging that a return to the Tower is all he ever wanted, and is laughed at by a satisfied Raven, ending the episode.

The transcript for "Crazy Desire Island" can be found here.