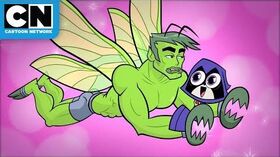 A giant cocoon mysteriously appears in the Titans' living room, and no one can find Beast Boy.

The episode begins when Raven, Beast Boy, and Cyborg are playing a game when Starfire, who was wearing poorly made and horribly done makeup, greets them. The three scream and huddle at one of the corners of the couch with Cyborg informing her that she looks like a clown. Raven tells Starfire not to come near them and places a picketed fence wrapped in barbed wire around them. Starfire wonders if they're not friends, and Cyborg says they are when she looks good. She admits to never knowing how important looks are, and Beast Boy and Cyborg tell her that they're everything because they base every decision people make.

Robin appears and informs them that looks don't matter, shocking the two who question the truth behind it. Starfire asks if this means she does not look hideous, but Robin says she does and places a paper bag over her face. He adds on that the ugly duckling was hideous as well and tells them the story of how the duckling was bullied for being different until he was accepted once he grew up to be a beautiful swan. He explains the moral is that looks don't matter and throws the book out the window. Raven questions the way he told the story.

Then Beast Boy interrupts by asking Robin how he picks his pants out if looks don't matter. Robin informs him that he gets to know them first to see their inner beauty and demonstrates a date with his pants where his pants reveal that it likes a poem about taking the dirt road with weeds. Cyborg says he likes that poem as well.

Robin reiterates that looks don't matter, but pulls down the paper bag down over Starfire's head when she attempts to take it off. Beast Boy flirtatiously asks Raven if he wants to see his insides, but she takes his heart out literally. She quips that it looks better than the outside and returns it into his body. Cyborg says he thought they lived in a superficial society that valued looks above all, and Robin celebrates that he was wrong. Beast Boy, comfortable now that he knows looks don't matter, attempts to tell the Titans that he'll be going through a metamorphosis, but is unable to say the word properly. Raven asks what type of change and he only says that he'll look completely different and that the Titans should have an open mind. Starfire reassures Beast Boy that he'll always be dear in their hearts, and Cyborg says they will even if he looks like Starfire. Starfire takes off her paper bag, but Robin pulls it back down.

Later, Starfire, Raven, and Cyborg attempt to watch TV, but notice that there's a cocoon in front of the screen which Cyborg mistakes for a croissant. Raven corrects him, and Cyborg prepares to poke it. Robin jumps in his way and claims the cocoon is an alien incubation pod. He begins spraying it with a flamethrower while Starfire compliments the smokey, burned hair aroma. Cyborg begins to relax and claims Beast Boy would love the smell. Raven wonders where he is, and Cyborg reminds her that he's going through his metamorphosis (which he mispronounces.) He realizes that Beast Boy must be in the cocoon and attempts to get Robin to stop, but he refuses even when Raven and Starfire step in.

Robin, upset that he never gets to use his flamethrower, continues burning the cocoon until it runs of fuel. He asks the Titans for what they were trying to tell him and Cyborg informs him that Beast Boy is inside the cocoon. Raven theorizes that the change must be part of his animal DNA. Starfire wonders what Beast Boy will look like when he comes out and Raven imagines Beast Boy as a very handsome muscular moth-man that carries her away. She snaps out of her fantasy when questioned by Robin.

Starfire announces that the cocoon is opening and the Titans gather in amazement only to see a slimy, green bug plop out, disgusting them. The creature begins groaning and climbs up Robin's leg while the Titans complain about its appearance. Starfire demands the flamethrower in order to kill the bug, but Robin knocks it out of her hand as he reminds them that the creature is their "friend". Raven complains how gross he looks, and Robin repeats that looks don't matter. Starfire and Cyborg lower their weapons and Robin picks up the creature, saying that nothing's changed even when it vomits on him. He vomits and hands the bug to Cyborg, who extends his neck to the toilet and vomits. His head returns and Raven informs him that the bug is building a hive out of his fluids on Cyborg's back. The Titans begin retching until the crime alert blares. Robin moves the cocoon to view the screen and sees that the criminal is Killer Moth. He attempts to call the Titans into action, but vomits instead.

Killer Moth, on the back of a giant pill bug gloats that Jump City will fall before his might. Robin, Cyborg, Starfire, and Raven confront the villain, but Killer Moth takes note of the "new guy" who is eating trash on a sidewalk. Cyborg grabs the creature and reveals it's "Beast Boy", before extending his head through the streets, under the ocean, up the tower, and vomiting in the bathroom. Killer Moth jumps down from the giant pill bug to examine the bug up close and says it doesn't look like Beast Boy. The Titans all clamor and Raven accuses Killer Moth of being a jerk for identifying people based off their looks. Killer Moth asks how else is he supposed to identify people and the Titans clamor again. Starfire says that he should be focusing what's on the inside, but vomits inside Raven's hood when she notices the bug has returned to eating garbage. Cyborg agrees with Starfire, telling Killer Moth to get to know him only for the creature to consume a kitten. He detaches his head and vomits inside his body.

Killer Moth asks if they're saying looks don't matter and he compares it to walking into a stinky bathroom and saying smells don't matter when they do. Robin says that they won't believe his twisted lies. Killer Moth protests that people have judged him off his looks his whole life which is why he became a super villain in the first place. In the background, the giant pill bug continues attacking Jump City. Starfire approaches Killer Moth saying he does not know the story of the ugly duckling. He says he does, but highlights the fact that the duckling was only accepted once he became a beautiful swan and only hung out with beautiful people from then on. The Titans are confused, but Raven believes that Killer Moth is saying that ugly things need to be with their own kind. Killer Moth protests, but Cyborg says that must be the reason they throw up when they see Beast Boy. The bug squirts fluids and Raven summons trash cans for the four to throw up in. Starfire says that since Killer Moth and Beast Boy are both gross, they belong together and shoves him into the villain's arms. Before Killer Moth can protest, the Titans pack into the T-Car, Robin tells them to have a happy disgusting life, and they drive off. Killer Moth claims that they only believe looks don't matter because they're all good-looking and decides to show them a world where everyone looks like him and Beast Boy so that looks truly do not matter.

In his hideout, Killer Moth fakes a call to Robin, disguising himself as a damsel in distress. The Titans immediately arrive and Killer Moth announces that he faked the call. He shows them his latest invention, the Bug Beam, which has the power to mutate anyone's DNA and reveals his plan to zap the entire population to look as disfigured and grotesque as him. Robin begins to say they'll never let the villain activate it, but he says it's too late and blasts them with the Bug Beam. The Titans mutate into hideous insects and Killer Moth says that since they look the same, looks truly don't matter. However, Cyborg tells the other Titans that they look disgusting and vomits, but Raven reminds him that he looks hideous as well and vomits. Robin and Starfire also complain, and Killer Moth decides to abandon his plans to eliminate the unrealistic beauty standards imposed by society. He hands them back the creature and claims the Titans never learn and that he's going to bed. Robin asks for the antidote, but Killer Moth refuses.

That night, the Titans seclude themselves in the living room with the couch, covered in their fluids, acting as a hive. They decide to remain in darkness so that the world will never see their twisted forms. At that moment, the elevator dings and Beast Boy, wearing a hat, asks where everybody's at and turns on the light. The Titans hiss, but Raven is stunned to see Beast Boy. Cyborg asks about the identity of the creature (who has finished building a hive on Cyborg's back) and Beast Boy introduces him as Chuck, a friend of Silkie's he allowed to stay at the tower. He places Silkie in the hive next to Chuck and asks the Titans why they're hiding in the dark. Starfire announces it's because they're ugly creatures who are unfit to be seen. Cyborg asks if Beast Boy is disgusted by them, but he decides to answer by asking questions. He asks Cyborg if they'll continue playing video games, asks Raven if she'll still punch him when he tries to hit on her, questions Starfire if she's still full of love and friendship, and wonders if Robin will continue to motivate him to be the best hero he could be. All the Titans answer with varying responses of "yes" and Beast Boy says that it's like Robin said: looks don't matter, they're family no matter what.

Cyborg remembers that Beast Boy announced he would be going through a metamorphosis and notes that Beast Boy looks the same. Beast Boy says he isn't and announces that he had his hair tips frosted. He removes his hat and begins posing, stunning the Titans. Raven says "gross!" and vomits, causing the other Titans to follow suit. Starfire remarks that it's horrible and vomits and Cyborg claims he is unable to look at Beast Boy before vomiting as well. Robin orders Beast Boy to get out of the tower and the four begin vomiting as the episode ends.

The transcript for "Croissant" can be found here.

Retrieved from "https://teen-titans-go.fandom.com/wiki/Croissant?oldid=438368"
Community content is available under CC-BY-SA unless otherwise noted.