"Weird Al" Yankovic
Darkseid is the ruler of Apokolips and enemy of both Superman and the Justice League. He is apparently a judge on the show Jump City's Got Talent. He made his debut in the episode "Two Parter". He is voiced by "Weird Al" Yankovic.

As the ruler of the planet Apokolips, Darkseid rules a powerful, intergalactic army, making him widely known as the greatest and most feared villain in the Universe. Darkseid is a major enemy of both Superman and the entire Justice League.

In the episode "Two Parter", Darkseid has captured the Justice League and imprisoned them in tanks above his fiery lava pool. When the Teen Titans arrive to save the Justice League, they are immediately stopped by Darkseid, who terrifies them with his scary voice. When Starfire offers him a lozenge, however, his throat is cleared up, and his voice returns to its normal, friendly tone. Because of this, the Titans are no longer intimidated by Darkseid.

Darkseid then reveals his villainous plan to kill the Justice League and destroy the Earth with the anti-life equation. The Titans, however, are distracted by his new voice, so much that they even begin to make fun of him for it, noting its similarity to famous songwriter "Weird Al" Yankovic. Darkseid notes that "Weird Al" is far more evil than he could ever be, going as far as to even call him a monster.

This enrages the Titans, who then go to battle with him. Darkseid is able to quickly and easily defeat all of the Titans. When Cyborg decides to quit pretending to be Green Lantern and be himself, he draws out three massive laser cannons. The blast from the cannons is so powerful that Darkseid is completely disintegrated, leaving only his boots behind (which immediately fall into the lava below). 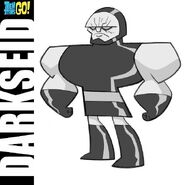 Darkseid as he appears in the game, Teeny Titans.