Uncle Death (by himself)

Death is a character who resides in a fort in the Underworld. He makes his first (and only) appearance in "Salty Codgers". Death is also Raven's godfather, as they both are demonic beings. He also refers to himself as the "Soul Collector". He is voiced by David Kaye.

Death, although he is usually perceived as an ominous, evil spirit, is actually quite friendly towards Raven, possibly because of their demonic relation. He excitedly sings a song about being Death (and cleverly using the rhyme "breath").

He explains that he will only release the deceased souls of the other Titans if Raven gives him her own soul. Raven agrees without hesitation, and Death grants their souls to her. Death then wanted her soul in turn, but the only problem was that she doesn't have a soul because she's half-demon, as she leaves taunting him, Death, angry at getting tricked, yells out her name "RAVEN!"

Death is a tall, scary (but somewhat jolly) demon. His clothes mainly consist of green rags (rag boots, rag skirt and rag hood). Death's accessories include a golden, skull-style belt and cape clasp, as well as spiked bracelets. His body, although skeletal, is quite muscular, with ripped muscles in his chest and arms (he works out often, presumably). His face is depicted as a skull, and his body is pale white. His appearance is based off of the DC hero "The Spectre". 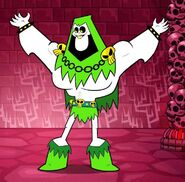