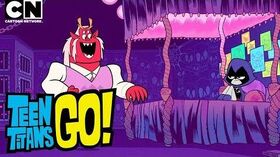 "Demon Prom" is the forty-second episode in the fourth season of Teen Titans Go! and the one-hundred-ninety-ninth overall episode of the series.

When Trigon forces Raven to attend her prom, she brings the rest of the Titans along with her just to upset him, but when chaos upsets the prom queen, the Titans try to cheer her up by getting everyone's votes.

At the Titans Tower, Robin, Beast Boy, Cyborg, and Starfire are relaxing as usual when the doorbell rings. No one volunteers to answer, and the bell keeps ringing. Cyborg thinks he might've ordered pizza, and that stimulates the Titans to violently bust open the elevator, smash down the shaft, blow up in the process, and run to the door. Sadly, only a nicely-dressed Trigon is there. Beast Boy asks where the pizza is, but the demon lord says he's just there to talk to Raven. They walk away angrily, and Starfire even slaps him with her hair.

Meanwhile, Raven is reading in her room when her dad teleports in, uninvited. Trigon explains that he wants to go to "demon prom" with her so she can be the prom queen, but she's more than unwilling to go to the event. Furious, Trigon goes full-on devil, pledging to destroy Earth if she doesn't go. Raven finally submits, and Trigon happily disappears. The other Titans show up, and when they hear about the prom, they are ecstatic. Raven tries to explain that it's just for demons, but then she comes with a scheme: the Titans can ruin the prom for her. Beast Boy and Cyborg get excited about the food and hitting on girls, and Robin, who initially wanted to go with Starfire, is coaxed into going with Raven so that he can be prom king. Robin deeply apologizes to Starfire, but she's like "whatever" and wipes her hand onto her skirt.

The Titans then freshen up for prom... Cyborg gets a nice bowtie and white suit on, Robin dons a red suit with fancy black shoes, Beast Boy does his hair and gets a dark green suit, and Starfire wears a green dress and applies makeup. Raven is also getting ready.

Trigon is annoyed at the excited Titans, saying that they shouldn't be going, and when Robin nervously shows up to pick up Raven, Trigon says she needs a bad boy, not a nerd like Robin (finished off with a good slap). Raven comes out, beautifully dressed in an orange and yellow dress with a scrunchie in her hair. Robin plays her up and kisses her hand, and Trigon is just getting angrier. Raven protests that the Titans are her squad, but Trigon compares this to a cringe-worthy Taylor Swift music video. However, he eventually subsides, and they all teleport to the prom.

However, it's not what the Titans thought. The DJ is barely even scratching like a sweet MC should, and the dancers are lifeless. Starfire says it's much drabber than she expected, and Trigon orders the Titans to the corner, not to make a sound (he also slaps Robin aka the dork again for protesting). Raven let's them go wild though... Cyborg and Beast Boy go crazy at the food table, eating vegan-yet-still-screaming (MC) sandwiches and annoying Raven's demon friends to the point of chaotic violence. Starfire, to liven up the prom, releases a bunch of cats into the dance that also reek havoc. Trigon is bristling with anger, but Raven is happy her plan is working.

Next, Robin then goes up stage to advertise himself as the prom king (and make his subjects bow), but he's only greeted by boos, a tomato, and an livid Trigon. He berates Raven and Robin, saying they are wasting their chance for prom king and queen, but Raven protests his selfishness. She doesn't WANT to be prom queen. Trigon disappointingly teleports away, but not before calling Robin a dork again. Outside on the steps, Starfire and the other Titans try to comfort the grieving Trigon, but he once again leaves, saying they are the root of the problem and once again calls them dorks. Cyborg and Robin realize they have to gain the crown for Raven to redeem themselves, and Beast Boy has a plan.

The Titans burst back into the prom in a flash of light (but they luckily have shades) with a boom box, and Beast Boy lays down a rap about Raven for being prom queen, if you know what I mean. After this scene, an orange demon introduces Trigon to the stage to announce the winner. Trigon, initially sad, is surprised to see that Raven has won after all!! Robin, her partner, has also won prom king, and though he's insanely happy, Raven is distraught; she explains to the others that whoever wins prom queen has to rule the underworld for the next millennium and calls them dorks, much to their shock. Trigon opens the portal to Hell, but Raven responds by using her green-eyeball prom queen staff to zombify the other patrons into pushing Trigon into the portal, without her.

Raven forgives the Titans for trying to make her queen of the underworld, and Cyborg has no idea why they keep trusting Trigon, to which Starfire thinks it's because they're easily manipulated. But they notice Robin is gone... Meanwhile, Robin is at his throne in Gehenna, enjoying his prom king-rule over his subjects. But Trigon just won't give him a break about being a dork, and slaps Robin again as well as telling him to shut up.

The transcript for "Demon Prom" can be found here.