This is the image gallery for the episode "Dog Hand".

Raven throws Silkie to the window

Robin and Starfire glance at Raven as she passes by.

Raven pins Cyborg against the fridge.

Raven tells the other that her father will pay her a visit.

Cyborg can relate, due to being half robot.

Baby Cyborg tosses the ball to his robot dad.

Beast Boy is confident he had more childhood issues.

Beast Boy having a flashback.

...but gets kicked away.

Baby Beast Boy ends up in a cage of toucans.

The Titans are terrified by the mention of Trigon's name.

"Devourer of a million souls!?"

"Trigon is one of the most powerful beings in the entire universe."

"My father is literally a demon who feeds off the suffering of others, especially me."

Trigon asks Cyborg if he got a new optical senor.

Trigon refers to Beast Boy as the party animal.

Trigon jokes with Robin about Batman.

Trigon wishes to talk to Raven.

"Raven's not much of a conversationalist is she?"

Trigon talks with the other Titans about his relationship with Raven.

"Duude! You got it twisted."

"You're old man is straight up the bomb."

Beast Boy puts himself back together after he shatters.

Trigon gave Beast Boy the ability to turn into any object he wants.

"Yet you choose to be a bean bag."

"Now I can veg out on myself."

Robin is granted a muscular body.

Raven asks Cyborg whether he got a power...

...which he reveals is a dog for a hand.

Cyborg's dog hand licks him on the face.

"You need to stop talking."

The Titans tell Raven that she should be more like her father...

...causing Raven to get furious.

But she goes along with it anyway.

Raven gives in and accepting her father's request.

Raven stealing the nightmares of children.

Raven collecting up all of the stolen nightmares.

She then channels the energy to open an inter-dimensional portal.

Raven's friends cheer her on.

The final step to becoming a demon: killing her friends.

Beast Boy retreats as a mouse onto Cyborg's shoulder.

Trigon wishes to get ice cream once Raven kills her friends.

"Still want me to be more like my father?"

Raven asks the Titans if they want her to take after her father...

...the other Titans assure her they don't.

Trigon resorts to destroying the Titans himself.

"By using the powers you gave us."

The Titans attack Trigon with their new powers...

...but they get blown away.

Starfire texting instead of fighting.

Starfire looks back at the commotion...

...but doesn't care, and continues texting.

Starfire about to lose her earth teen powers.

All of the Titans return back to normal.

"But he'll be back. Probably for Thanksgiving." 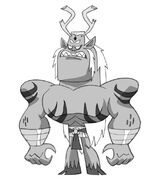 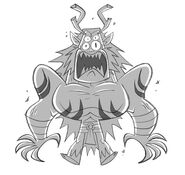 Add a photo to this gallery
Retrieved from "https://teen-titans-go.fandom.com/wiki/Dog_Hand/Gallery?oldid=379466"
Community content is available under CC-BY-SA unless otherwise noted.