This is the image gallery for the episode "Dreams".

Starfire goes to sleep and dreams about...

...planning a picnic with her friends.

The Titans suddenly transform into kitties.

Starfire is delighted her friends have turned into kittens.

Starfire calls for a "kitty picnic".

Starfire has the picnic with her kitty friends.

Kitty Raven in a box.

In Cyborg's dream, the Titans are out of pizza.

Cyborg must battle for the pizza.

Cyborg is victorious and brings pizza to all.

"We GOTTA tell people about this!"

But in reality, he's kissing someone else...

Raven's dream however, isn't as happy as the others...

"You cannot hide from your destiny!"

Raven takes over the world after she kills her friends.

Raven is actually riding on Silklie.

In Silkie's dream, he strolls through the park to find...

Silkie and Star dance next to the Statue of Liberty.

Silkie is not amused.

My reaction to being amazed! 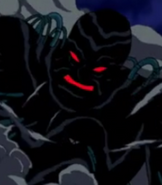 Oh Yeah! I'm Bad!
Add a photo to this gallery
Retrieved from "https://teen-titans-go.fandom.com/wiki/Dreams/Gallery?oldid=402144"
Community content is available under CC-BY-SA unless otherwise noted.