This is the image gallery for the episode "Driver's Ed".

"This is going to be the greatest achievement of my life."

Robin barges into the room and calls Beast Boy over for an emergency.

Beast Boy is annoyed that Robin only wanted to get take out.

Cyborg loses data thanks to Robin

Robin only wanted to buy the game.

Raven about to banish the Demon.

The Demon is spared when Robin interferes.

Turns out Robin wanted to catch a few waves.

Robin claims there is an emergency.

Robin notices no one has responded.

"So what's the emergency Robin?"

"Eveythings half off at the dollar store!"

Cyborg thanks Starfire for supporting him...

...but is unable to recognize her.

"Who's that orange girl?"

Robin explains his licence got suspended.

Beast Boy is shocked by the news.

The Batmobile explodes behind him.

"So you blew up the batmobile?"

Robin states his plan to renew his licence using a guy on the internet.

Ed puts the money in the trunk and takes out a notepad.

Robin listening to the music.

Robin dances to the music.

Ed gets into the car.

A cop shoots the car

The Titans laugh at Robin's expense.

"It's okay Robin. Many people fail the test of driving."

...before walking into the door.

Robin leaves for his next test.

Robin explains to Ed he was a little freaked out on the first go.

Robin is shocked to hear the sound of gun fire.

But the threat of another deduction silences him.

"Only 3 seconds in the air? That's a deduction."

"I asked you to turn at the cereal lane."

Ed steals at a casino

Ed steals from a money factory.

"By the end of the rainbow."

A leprechaun shows up to shoot the car.

Cyborg tries to recognize a stranger

The Demon peering out of a manhole.

The Titans notice Robin parked outside a jewelry store...

...and figure out he's the getaway driver.

Robin hears a car honking behind him.

The Titans try to warn Robin about Ed.

Robin about to fire his grappling hook.

Robin's swerves the car around the pole.

The Titans having trouble, while Robin breezes along.

Robin heads towards a building...

...while the Titans crash into it.

Robin enjoys himself, while Ed is terrified.

Cyborg gets hit by the wheel.

Ed is shaken up by the ride.

Ed reveals he was using Robin.

Robin tells Ed he knew the truth all along.

"That's why I'm not warning you about the demon."

... and Ed is taken to a portal by the Demon 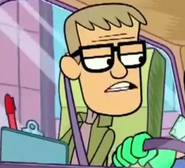 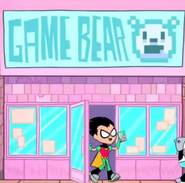 Gas Pedal
Add a photo to this gallery 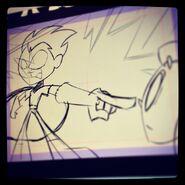 Add a photo to this gallery
Retrieved from "https://teen-titans-go.fandom.com/wiki/Driver%27s_Ed/Gallery?oldid=379467"
Community content is available under CC-BY-SA unless otherwise noted.