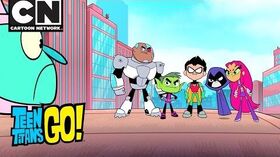 It's Easter and the Tooth Fairy is trying to take over the holiday.

The transcript for "Easter Creeps" can be found here.