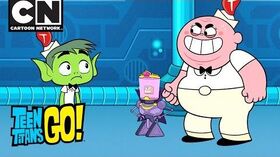 "Employee of the Month: Redux" is the twentieth episode of the fourth season of Teen Titans Go!, and the one-hundred-seventy-seventh overall episode of the series.

While the other Titans are trying to stop a cow-stealing UFO, Beast Boy gets a job to buy a moped.

The episode starts with a shot of a farm when a UFO zooming over it, abducting a cow. The cow is revealed to be a fake, as Cyborg pops out of with the rest of the Titans. The UFO tries to escape, and the Titans chase it, but it ultimately gets away. Beast Boy (who had been lagging) finally catches up, and the Titans go back to the Tower. While most of the Titans are going over how the UFO keeps evading them, Beast Boy comes over with a magazine talking about a moped he wants the Takayama 3000.

He asks all the Titans to help him, but they all rebuff him. He complains about this, and Raven suggests he get a job. He goes off to look for one and ends up in front of a restaurant called Mega Meaty Meat with a "workers wanted" sign in the window. An odd-looking guy who is the manager comes out and asks him if he would like a job there. He starts to explain that he is a vegetarian and wouldn't like to work at a place like that, but then he explains that there is a moped involved, which quickly changes his mind. A bit later, the Titans show up, and all seem a bit put off by the place (All except for Cyborg, who is too hungry to notice.), but they cannot reflect on it any longer as the UFO reappears.

Raven asks if he's coming, but he says he'll get fired if he leaves. They rush out and chase the thing again, this time leading it to a wall in which it crashes. They then see that there is a cow inside, but Cyborg identifies it as not the pilot but the power supply. Back at the restaurant, Beast Boy is experiencing something worse than an alien invasion: the lunch-hour rush! To escape the hungry mob, he runs to the back room and finds multiple cows strapped into a machine he talks to a block on a screen who reveals himself to be the one behind the UFOs.

When he comes out, he is nothing more than a block of talking No-Fu in a small robot suit. Unfortunately, he has the whole restaurant in the sky, and his other UFOs will be making quick work of the Titans. Luckily, the Takayama 3000 can fly! Beast Boy grabs the canister in which the No-Fu is kept in and hops on the bike, frees his friends, and blows up the mother-ship. When he lands, he explains what was going on, and they all agree it was a pretty weird day. The episode ends with Cyborg eating the alien tofu leader unknowingly and saying: "What?," when the others look at him quizzically.

The transcript for "Employee of the Month: Redux" can be found here.