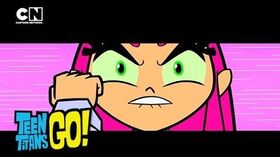 Starfire wins a goldfish at a carnival and vows to keep it alive.

The episode begins with the terrified screams of civilians in danger, but it's not from a supervillain rampage. They are just riding some poorly assembled carnival thrill rides. The Titans are at the carnival as well, looking for some amusement around the game booths.

Raven doubts they will win anything, though, since the games are operated by crooked carnies. Robin, who feels confident in his team, believes they can beat the odds and win some prizes. Cyborg, Beast Boy, Raven, and Robin each try to win at a classic carnival game but find that they have been rigged.

Starfire wants to try and win a goldfish at the goldfish toss game, but Raven warns her that it is the cruelest game at the carnival. She explains that it's the one game that's NOT rigged, but carnival goldfish have notoriously short lifespans.

Starfire feels she can defy the carnies and keep her fish pet alive with the power of her love. After a dramatic scene of her tossing a ball into a bowl, Starfire wins her goldfish prize, along with a plastic bag full of water. Starfire has an instant fondness for the goldfish and its water, which she drinks straight from the bag. At this point, the Titans have worn out their welcome, so they leave the carnival.

Back at the Tower, Starfire flies around with her goldfish while her friends worry she is getting too attached to it. Starfire reminds them that her fish, whom she has dubbed as "The Fish," will live for many years because of her love. Robin offers her some tips for extending a goldfish's life. Once The Fish is in a bowl, Starfire takes it on a night out on the town. Afterward, she tucks the fish into bed with her just before she falls asleep.

The next morning, Robin, Cyborg, Beast Boy, and Raven are eating cereal when they hear a shriek. Starfire enters the kitchen in tears. Her fish died overnight and is now floating lifeless in the bowl. The other Titans are not as concerned as Starfire, who feels it is her fault that The Fish died. Suddenly, the ghost of The Fish appears next to Starfire.

The ghost of the fish says the word "banunu," which Raven translates to mean "friend." She deduces that The Fish wants the Titans to rescue the other fish from the carnival. Starfire, feeling she failed The Fish once, promises she won't fail again.

Once all the fish are in the big plastic bag, Starfire flies off to dump them in the ocean. But instead, she dumps the fish into a port-a-potty, thinking it will empty into an ocean. When Starfire finds out that she made a big mistake, she fears she has failed The Fish once again. Just then, ghost fish begin to appear all around her, flying happily. Even though they are ghosts now, it's still a better existence than being carnival fish. Starfire watches as The Fish and its ghost friends fly away. Then she starts drinking more fish water from the plastic bag. The other Titans have had enough of this sight, and they walk away. The episode ends with a belch from Starfire.

The transcript for "Fish Water" can be found here.