Temporary leader of the Titans

Flex is a mockingbird who's strength has been enhanced by mutant means. He is a minor villain in Teen Titans Go! who made his debut in "Birds".

When Flex first appeared, he was nothing more than a regular mocking bird. He, along with his friend Muscle, built a nest inside the Titans Tower's chimney. Robin ordered them to leave, but the birds refused and mocked him. Robin angrily used birdy-cide to poison the mockingbirds, which caused them to leave.

After they escaped, they both mutated into giant mockingbirds due to the birdy-cide of Robin. They instantly gained the friendship of all of the Titans (except Robin). They moved into the Tower, and for a while they got along. They threatened to hurt Robin numerous times, until he finally moved out of the tower. Once he moved out, the birds became very obnoxious, and annoyed the other Titans. The other Titans found Robin, and they attacked the mockingbirds, ordering them to leave.

The birds fought back and defeated the Titans, until they used birdy-cide again. They both mutated into superior beings, and told the Titans they no longer wish to fight them. Robin attacked them regardless, kicked them out of the Tower and they flew away, but not before leaving an egg in Robin's room. 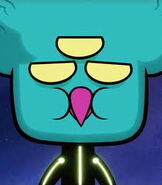 Add a photo to this gallery
Retrieved from "https://teen-titans-go.fandom.com/wiki/Flex?oldid=395450"
Community content is available under CC-BY-SA unless otherwise noted.