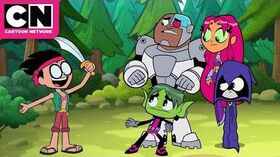 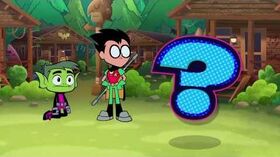 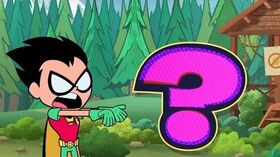 "Forest Pirates" is the thirty-fourth episode in the fifth season of Teen Titans Go!, and the two-hundred-forty-third overall episode of the series.

The Titans are at Super Hero Summer Camp for the week and they may need to add another teammate to win the big canoe race.

It's summertime! The Titans head down to Superhero Summer Camp, ready for some fun activities. But for Robin, fun is only an afterthought... his primary goal is for the Titans to dominate the canoe race this year. He's already set the stage by poisoning the Titans East team with poop yogurt. So Robin's quite surprised when Bumblebee shows up, eager to jump in with the Titans. Her bee transformation powers are decent, but she's not unethical/disgusting enough to fit in with the team. So Robin shuns her.

As the start of the race approaches, the H.I.V.E.'s getting real cocky about victory. Beast Boy worries about losing to them again, but luckily, Robin has a plan: they'll be swashbuckling pirates! This way, the Titans can forget about the rules and rob their way to triumph. Robin tries to sell them the idea with a pirate ship, but the Titans aren't on board—they'd rather recruit Bumblebee to the team instead. So Robin proceeds to lecture them on team roles, arguing that the current format is best. The Titans fundamentally disagree, but Robin gets his way as usual. Bumblebee tries to join again, but Robin slaps the little bee away. It's canoe racing time!

Once Batman starts the race, the Titans instantly plow through the competition with their massive pirate ship. Everything is shipshape when Raven suddenly spots Bumblebee canoeing starboard side. Without hesitation, Robin takes her out with a rock. The Titans aren't too happy with him, but Starfire notices a new problem.... the ship has run into trees, and now the other boat teams are passing them. Thankfully, Bumblebee returns with a chainsaw and cuts them free. Despite this, Robin is horrified by the idea of a six-Titan team, so he smacks her away again.

The buccaneers make an outstanding comeback, smashing into competitors and blowing the competition out of the water. Literally, with cannonballs. After making the H.I.V.E. walk the plank, the team enjoys a nice drink, that is until a huge bear suddenly ravages them. Bumblebee rescues them with a swarm of bees, but the H.I.V.E. has regained the lead, and the Titans... have given up. Bumblebee hasn't, though; with an inspiring speech of teamwork, she rallies the heroes back to the race. Cyborg's booster engines alone aren't enough to catch up, though, so Bumblebee shoots a honey-filled hive at the H.I.V.E. Three bears immediately pounce on them, and they run off a waterfall...

And the Titans win! The team thanks Bumblebee for all her help, and Robin, impressed by her degenerate cheating, even allows her to join the Titans. The new team of six start dancing like they're on the TV show Friends, but some ravenous bears interrupt their merriment.

The transcript for "Forest Pirates" can be found here.