Start a Wiki
"GO!" is a remixed hip hop song performed by Lil Yachty for Teen Titans Go! To the Movies. It can be bought on the official soundtrack.

This rap song basically covers everything that's great about the Teen Titans.

They the real heroes taking on the big menace,

Beast Boy, can turn straight up into an animal

(Awwww) Check out this kitty, meow!

The-Star-the-Fire, the live, the wire

The alien princess in her alien attire

Is she down with the Titans? Oh the-yes indeed!

Booyah, booyah! Got his cannon blasters

Boom with the smoke, bombs and birdarangs,

Cyborg: No no no, for real, those are some super small hands.

Robin: What? No they're not! Whatever, just keep going!

Raven is here to drop it on you even harder

There's no darker than she, Raven's dark as can be

Teleport and magical powers, they adios! 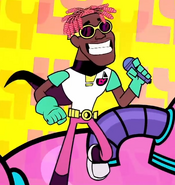 Lil Yachty, the musical master in this video.

Here's the real Lil Yachty right before the music video.

The Teen Titans and Lil Boat dance up on a stage.

Beast Boy's gone and turned into a green Lil Yachty.

The sweet mid-instrumental section of the song.

"Only in theaters July 27th!" (or wait for DVD.)
Add a photo to this gallery
Retrieved from "https://teen-titans-go.fandom.com/wiki/GO!_(remix)?oldid=394975"
Community content is available under CC-BY-SA unless otherwise noted.