Teen Titans Go! Wiki
Register
Don't have an account?
Sign In
Advertisement
in: Season 3, Media, Episodes focusing on all Titans,
and 12 more 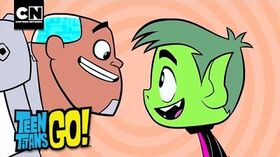 Robin makes the other Titans sell their treasured mementos from past episodes. However, this cause major problems with their history as a crime-fighting team.

The Teen Titans (minus Robin) are sitting around on the couch reminiscing and talking about memories in an aimless, non-specific way. They decide to go up to the attic to look over the stuff they kept from past episode adventures. Beast Boy finds the remains of the legendary sandwich from the first episode while Cyborg pulls out a box with four pies sealed inside, thinking back on episode two. Raven finds a dodgeball and recalls the 22nd episode, "Artful Dodgers" and Starfire finds the old Jeff mask from episode 57, "I See You". Robin gets up to the attic in a frenzy demanding to know where they were since the crime alert has been ringing for hours and villains have been roaming Jump City. They tell him about their reminiscing and he refuses to live in the past. Cyborg spots a box with Robin's name on it and identifies a pair of "green undies and elf boots". After making a couple of incorrect guesses, Robin reveals those were part of his original Robin costume back when he was Batman's sidekick. He uses this to illustrate that history is not worth remembering as it's filled with pain and regret while Raven insists that without the past there is no future.

In any case, Robin forces them to have a garage sale (despite Raven's repeated warning about the past affecting the future, and Robin's dismissal of her words that "pretend to sound deep"). They manage to sell everything for a little under $12. Though the other Titans are disappointed at their losses, Robin is pleased to be rid of the garbage Unfortunately it seems the selling of their precious memorabilia caused time to freeze. Raven explains that without those items time cannot progress. Cyborg wants to get their items back from the garage sale customers but Robin reminds him that all sales are final. They're left with no choice except to travel down memory lane and get their items back that way. Memory Lane is personified by a cosmic hallway filled with doors on either side. Raven tells them that they can access the items via doors (that have episode titles above them) and take them back to their world which should get time moving again. They need to hurry because the hallway of memories is already fading.

First, Beast Boy goes into a door that takes him to the "Legendary Sandwich" episode. He grabs the sandwich before Silkie eats it and gets back to the hallway only to realize it had bacon on it (apparently he had forgotten it had bacon back then). Next, Cyborg goes into a door leading him to the kitchen scene in "Pie Bros". He stealthily grabs the container of pies while his memory self and memory Beast Boy sing the pie song. Third, Starfire darts through a door and corners her memory self at the steakhouse in "I See You" just as she's putting on the Jeff mask. She manages to grab the mask with some force and get back to the hallway of doors. Following that, Raven pops into "Artful Dodgers " asks her memory self, who's in the middle of the final dodgeball game, for a dodgeball. Memory Raven hands over the ball she's holding and gets pelted for her troubles by the opposing team.

Now all that's left is Robin and his memory door is the only one with guards: Pain and Regret. He tells them he has issues with his past and is reluctant to go into the door but with some encouragement from Starfire (as Jeff), he fights past his Pain and Regret and accepts himself for who he is. He opens the door to a memory of his former self rappelling up a building with Batman. Robin snatches the green shorts right off his memory self and gets back (leaving the poor memory sidekick in tighty whities). Raven teleports them back to the real world just as the Hall of Memories completely disintegrates. Back in Jump City, time has returned to normal and Robin realizes that Raven was right about there being no future without your past. He takes it a little far though by opting to wear his original tight, green shorts from his sidekick years.

The transcript for "Garage Sale" can be found here.