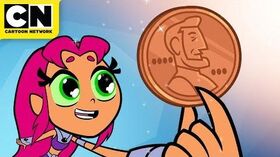 Robin hatches a plan to get rich off pennies, but Starfire believes they are magical.

It's another day in the Titans Tower, and you know what that means! Robin has something to announce to the fellow Titans. Starfire, Raven, Beast Boy, and Cyborg are on the couch. Robin enters the living room with a mysterious box. Raven gives Beast Boy and Cyborg a heads-up and claims that there will be nothing good in the box. Robin continues with his little announcement, and he eventually shows them what's in the box - a penny. Raven affirms her statement by saying, "Told you there was nothing good in that box." They start to complain about how it's just a penny and that there is nothing special about them. But Starfire simply believes that pennies have the magic to summon the genie President Lincoln to grant any wish. Raven, Beast Boy and Cyborg though oppose her belief on Lincoln having the Lincoln Hall as carrot cake and believe it is baked out of other flavors instead.

Robin, however, states the opposite of what Starfire said, and claims that pennies are special. He starts going on an in-depth explanation about pennies. The main thing he points out is that you can actually make profit off of pennies. He says that pennies cost 50% more than what it's actually worth. The Titans start questioning him, but soon enough Raven, Beast Boy and Cyborg are tempted by the potentially increased value of pennies' materials, so the four of them decide to collect unwanted pennies which they will melt and send back to the government to earn a profit. Robin then claims that they won't get caught by the government easily since it is proven that souvenir coin machines are meant for defacing coins. Starfire tries to convince them about the poor people who put their wishes into the pennies tossed into the wells, but they are more focused on money instead and put their plan into action.

After the three boys and Raven have robbed an entire wishing well, H.I.V.E. Tower, Hall of Justice's pool, a driveway and The Batcave, they gather all of the pennies into their swimming pool and proceed to leap into the pile as a celebration before the melting process...only to get completely fractured. Starfire feels harrowed by her friends' injuries and of course avarice, so she decides to fly to the Lincoln Memorial Hall to clear her mind from such a horrifying sight.

Starfire, after tasting the Lincoln Memorial Hall that is made from carrot cake, is inspired to tell her friends to quit their plan of melting pennies. Raven, Beast Boy and Cyborg are moved by her speech about the children's wishes that are contained in the pennies, but Robin remains greedy and goes on melting the pennies himself. Suddenly, the BEP (Bureau of Engraving and Printing) agents arrive and decide to arrest all of them for attempting to deface currencies (even though it is mainly Robin's fault), and their money-related weapons quickly defeat the Titans. However, even when all hope seems lost, Starfire remains hopeful that President Lincoln will rescue them, and her wish comes true after she tosses a coin into the well! President Lincoln is here!

Thanks to Lincoln's genie powers, the BEP agents and the pile of pennies finally disappear for good. Starfire is thanked by her four friends, but all of them then notice Lincoln who is saddened for not having the moustache he wants. This time, Starfire returns the favor by granting him his wish, and now he thanks the Titans before flying away with his long lovely moustache.

The transcript for "Genie President" can be found here.