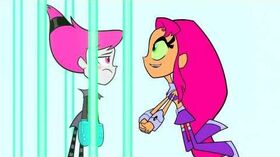 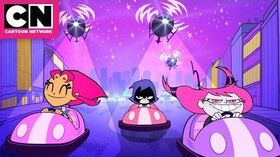 out. Beast Boy then comes out with slicked hair, ready to go. Starfire then comes in and asks them what they're doing. They tell her and she wants to join but they won't let her because she's not "crazy" enough. Starfire claims she is crazy enough but they still decline saying it's a boys' night out and no girls allowed. Before they go, Starfire grabs Raven and claims they will have an even crazier girls' night out. The boys doubt it and leave.

After they leave, Raven wants to go enjoy a movie alone, but Starfire wants to have a crazy girls' night out. After guilt-tripping Raven to join with her puppy dog eyes, Starfire takes her to the Juvenile Correction Facility. They got to see Jinx, who thinks they're there to gloat about putting her in prison, something Raven does when she's bored. Starfire tells Jinx that they want to invite her on a CRAZY girls' night out, claiming she will know how to have a crazy night and since she's a girl, she can join. However, Starfire warns Jinx that if she tries to escape, she will obliterate her with an eye blast.

Meanwhile, the boys are having their "crazy" night

out which starts out with walking down the street and dancing. The male Titans then enter a hat store and try on and buy a bunch of hats. Meanwhile, Starfire takes the girls to an amusement park because

the commercial for it said it was crazy. After Jinx helps them cut the line to the bumper cars, they get bored and Starfire admits she doesn't really know how to be crazy. After convincing her, Jinx gets Starfire to break her out of her handcuffs and she turns their bumper cars into fast getaway cars. They attract the attention of the police after speeding up their cars. After getting chased by the police, they knock over a building, and they all ride like a surfboard. After the building stops falling, the JCPD arrest them and put them in jail.

crazy ways from a restaurant. While all of the girls are in jail, they all admit that they had a great time and Starfire breaks them all out so they can continue their crazy night. They break out and go past the boys, who are claiming their "crazy" night was the best one ever. The girls don't stay long because they're being pursued by the JCPD... again. The boys just shake their heads in disapproval and calling the girls' night lame while still claiming their night was the craziest ever. The episode ends with them howling like wolves.

The transcript for "Girl's Night Out" can be found here.