--Green Cyborg when taking down Cinderblock

Green Cyborg, also known as Soldier Cyborg, is one of Cyborg's five split personalities created by the Mysterious Prism. He represents Cyborg's disciplined and respectful personality.

So far, Green Cyborg has made one appearance on Teen Titans Go! in "Some of Their Parts". He is voiced by Khary Payton.

While Robin was interrogating Cyborg in order to isolate his best personality from the rest, he shoots Cyborg with a Mysterious Prism loaded gun, resulting in five different Cyborgs and Green Cyborg was among them. Green Cyborg calls Robin "sir", already impressing him. Robin then proceeds to ask him what to do in a hostile situation, but replies in quick reaction impressively, earning a spot in Robin's new reformed team. He would later assist Robin in picking the best emoticlones of Beast Boy, Raven, and Starfire. While Robin introduces his new team, Green Cyborg asks for his permission to do twenty push-ups. Then a crime alert goes on and proceeds to battle, but not before waiting for Robin's command. During the battle, Green Cyborg fires missiles at Cinderblock and uses Yellow Beast Boy (the team's human shield) to deflect some incoming missiles. Back at the tower, Green Cyborg is doing push-ups when Robin admits he misses the fun loving Cyborg, but doesn't regret this decision because he thinks made the best team of all time. Green Cyborg then asks for permission to tell him he can watch him dance all night. Robin later on gets the idea to split himself into five in order to create a better crime fighting team and takes out Green Cyborg in order to bring back regular Cyborg.

Green Cyborg looks exactly like regular Cyborg except the transparent modules on his head and arms are green, and the cybernetic eye is blood red. Later on, he wears camouflage armor on his shoulders and torso. He also wears camouflage shin pads.

Green Cyborg respects authority. He has no time for fooling around and takes everything seriously. Unlike regular Cyborg, he respects his leader and follows their instructions with immediate effect as shown by how he respects Robin. Because of this, Robin appointed him as the second-in-command of the team.

"Sir, it appears that the five parts of Beast Boy's personality seem to be more or less the same, sir!"

"Sir, it is the opinion of this soldier that they would all be ineffective in a combat scenario, however, one would be useful as a human sheild, sir!"

"This one would make a great hero, sir!"

"Sir, I could watch you dance all night, sir! 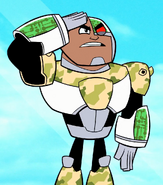 Add a photo to this gallery
Retrieved from "https://teen-titans-go.fandom.com/wiki/Green_Cyborg?oldid=409314"
Community content is available under CC-BY-SA unless otherwise noted.