Had to Be There

Had to Be There

"Strength of a Grown Man" 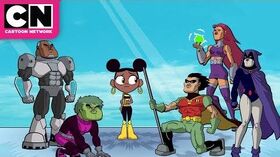 So she isn't left out of inside jokes, the Titans time travel to past adventures and insert Bumblebee into their memories.

The episode starts in the kitchen. Bumblebee reads the Jump Times when, suddenly, Beast Boy and Cyborg start saying "waffles." Having no idea why they are saying that, Bumblebee says "it's a little late for breakfast," because they were saying "waffles." Cyborg then puts on a record of the Waffles Song, which angers Robin. Robin shoots a Birdarang at Cyborg's turntable, exploding it. The other Titans enter and Raven is not interested. Bumblebee doesn't get "Waffles". Starfire tells her it was a memory they had. Bumblebee asks if it was supposed to be funny. Beast Boy and Cyborg nod and respond with a "waffles". This gets Bumblebee to act a little sarcastic, thinking she was there and Raven exclaims in disgust, saying that "she had to be there." Robin then tells them that Bumblebee is a new member of the Teen Titans and he doesn't want anyone to reference any memories he or she had before she joined so she doesn't feel left out. Robin then burns flags representing the first four seasons and the part of Season 5 before "Forest Pirates." Bumblebee notes that note remembering the past memories the others had is a little too extreme and hardcore. Starfire then remembers a memory about Robin being extreme, and Robin shuts her up. Robin then says he is SERIOUS about what he said and this causes Beast Boy and Cyborg to remember "Let's Get Serious". The other Titans, sans Bumblebee, turn into their serious forms, with Bumblebee not getting that. After the Titans change back, Raven says that Bumblebee had to be there as well. Cyborg then requests a song, and Robin tells him that it depends if it is not a song that was from a previous memory. Cyborg doesn't care and plays "The Night Begins to Shine". Robin stops the song because it was "too epic", and it was from a past episode. Raven and Bumblebee say "had to be there" again. Beast Boy then says they could put her into their memories, and Bumblebee says that the Titans don't have a time machine, and Beast Boy remembers "Money Grandma"! Robin says they should go back in time. Cyborg activates the time machine and Bumblebee says that messing with memories is a bad idea. The Titans are really excited by the fact they will take her to their memories, so they take her to "Waffles."

In "Waffles", the scene where the second half of the Waffles Song plays. The time machine appears, and the current Titans come out. Robin attempts to push the 2014 Titans out of the Tower by bossing 2014 Robin around. After the 2014 Titans leave the tower, Bumblebee and the other current Titans make a new memory of "Waffles"! Bumblebee joins in the Waffles Song, but after Starfire says that she is feeling the memory in her brain, Bumblebee starts saying "pancake", which messes the memory up. Bumblebee said she wanted to "change it up", but Beast Boy acts like he's choking and Cyborg does "first aid." Bumblebee wants to use "waffles", but the others are fed up and they've already messed up the memory. The Titans then travel to "Let's Get Serious."

After kicking the Serious Titans out of the Tower, the Titans redo the memory with Bumblebee. The Titans start turning into their serious forms, but Bumblebee can't do it. Raven then tells her to "scrunch hard" and say a one-liner. Bumblebee attempts to turn serious, but she does it wrong. After doing it again, she says her life is meaningless. She then scrunches harder and finally transforms into her serious form - a bee - which is not serious to the others. They don't remember the episode anymore, and Beast Boy pulls out his brain, because it feels "lighter" to him. Bumblebee touches Beast Boy's empty brain and drops it, disgusted. She doesn't want to mess up anything else! Then they decide to travel to "I Saw You Dance."

The Titans arrive in the Night Begins To Shine Dimension - but they're not in their radical forms! To turn them radical, Cyborg plays the song. The Titans feel like nothing is going to be ruined - until Bumblebee loses her balance and holds onto Cyborg's bike tight. She covers his eyes, which makes the bike turn around and crash the other vehicles.

The Titans travel back to this episode, and Bumblebee told them that messing with memories was bad. The Titans can't remember anything, including their friendship! After a while, they remember the new memories with Bumblebee and begin laughing at all her failed attempts to be apart of them. Bumblebee becomes annoyed at this saying that it's not funny however Raven answers her saying that once again she had to be there. The episode ends with Raven smugly looking at the screen.

The transcript for "Had to Be There" can be found here.