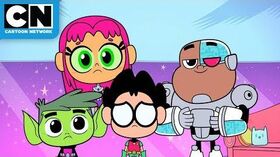 It is time to celebrate Halloween, but the Titans have lost interest due to growing up. So Raven tries to bring back their spirit of Halloween by turning them into little kids!

The episode begins with Raven making preparations for Halloween, dressing in a Pretty Pretty Pegasus costume (Sparkleface, to be exact). Attempting to give the other Titans an impetus of Spirit for Halloween, Raven describes the fun events they can do tonight. The other Titans give excuses for not celebrating the merriment along with her. Raven reminisces that that was their favorite holiday. Robin says President's Day serves as his new favorite holiday as if that would be any more fun.

Starfire reminds Raven again that last year they got sick after eating the trick-or-treat candy. Raven explains that they shouldn't have eaten the candy without unwrapping it. She claims that she likes to do scary stuff with them, being a half-demon and all. However, Cyborg states that the best part of Halloween originally was the scariness, and now that they are older, it isn't as fun anymore. Beast Boy claims that he's a full-grown man now and does not have time for it. Raven tries in vain to scare them with an ominous flashlight and a jack-o-lantern (what a waste of good produce). She leaves the living room, muttering that they're bummers.

Raven figures she can reinstitute their great demeanor of the holiday, so she mixes up several ingredients in her cauldron pumpkin, summoning the Halloween Spirit, a fiery, pumpkin-looking soul. She begs for his help to bring the Titans' Halloween spirit back. The Spirit from the pumpkin accepts her offer, transforming the other Titans into little kids. Astonished and a little annoyed, she finds the Titans, now half her size, in the lounge. They freak out and scream after seeing all the Halloween decorations in the living room. The pint-sized Titans question Raven on why they are now children, and she answers that she has no clue why. Some trick-or-treaters ring the doorbell at the Tower, but the little Titans think they are real monsters. They engage the Tower lockdown and brandish hundreds of missiles at the door, scaring them off. Just when little Robin calms down, he gets spooked by the Halloween Spirit. Shocked, he kicks it off in the air, breaking the pumpkin. Raven's exasperates as the Halloween Spirit has now escaped, most likely to wreak havoc on Jump City.

The Teen Titans (now they are the KID Titans!) didn't know anything about the Spirit of Halloween, so Raven confesses that she incarnated it with her ancient legends book. She shows them how to bring The Spirit back to his realm to make the Titans teenagers again, warning that they must complete the task before the moon sets or they'll remain kids forever. They make their jack-o-lanterns and Justice League costumes, except for Starfire, who created a bedsheet ghost costume, which does not have anything to do with Justice League and set off to trick-or-treat. However, the little Titans are still scared of the spooky decorations and costumes. Fortunately, Raven calms them up by telling them that they would get candies if they conquer their worst fear. After trick-or-treating house after house, they catch the Halloween Spirit's attention. The Evil Spirit brings the decorations to life as the Titans try to fight against them. They can't succeed, as their fear is still in abundance. The Titans flee, dashing through the neighborhood and away from the monsters until trapped. Raven apologizes to them for this mess, saying that she ruined Halloween by summoning the Halloween Spirit. However, the little Titans contradict her apology because they enjoyed it, saying it's been the best Halloween ever! They start to power up on candy, bringing them enough energy to resume the fight against the monsters.

The Titans' willpower makes the monsters revert to ordinary Halloween decorations, but one final enemy remains. The Titans now face the ghastly Halloween Spirit, now in a gigantic form. Raven orders them to attack mode, and they light their jack-o-lanterns, emanating light energy lasers that are enough to weaken the Spirit. Raven tosses her carved pumpkin just below the Spirit. The force of it sucks the Halloween Spirit right back into the jack-o-lantern, and he is defeated. Victorious, the little Titans return to their normal size. Raven thanks them for spending this year's Halloween with her, and Robin thanks her for reminding them how much fun Halloween is. But to make sure that she gets the point across, Raven tells him there is still one last thing. Confused, Raven says "boo" (with flashlight effects for good measure), scaring all the other Titans. Running back and forth through the neighborhood, Raven can't help remarking: "I love Halloween!".

The transcript for "Halloween" can be found here.