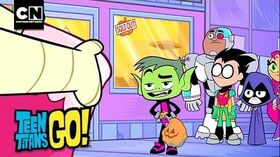 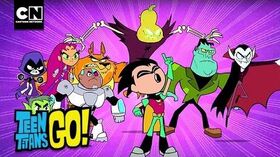 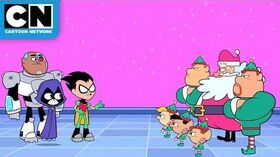 "Halloween v Christmas" is the second episode of the fourth season of Teen Titans Go!, and the one-hundred-fifty-ninth overall episode of the series.

When Santa tries to take over Halloween, it's up to the Titans to save the holiday.

On the night of Halloween, the  Titans plan to scare the trick or treaters, but there is no candy or decorations. When all hope is lost, it is revealed to the Titans that Santa took all candy and decorations. Santa chases the Titans back to the Titans Tower and tells the Titans he will not leave until the Titans give Santa the last bag of candy.

Santa plays Christmas carols and pretends to give them Christmas presents in exchange for the last bag. But the Titans refuse and call in Dracula, Frankenstein, Wolfman, and The Great Halloween Spirit to help fight Santa.

The Titans almost win, but Santa pins Halloween Spirit, and the Titans give Santa the candy in defeat. But, they had swapped the bag of candy for a bag of TNT who Santa says "Wait, a minute these are not treats," and Titans reply saying: "They're TRICKS!" before catapulting Santa into the North Pole. Then, once Santa reaches North Pole, he does a tiny fart then it switches to the Titans doing their victory dances.

Then the Titans recreate Halloween (to the Thriller Song), and Robin shouts: "Merry Halloween to all and to all a Scary Night" then the moon laughs evilly.

The transcript for "Halloween v Christmas" can be found here.