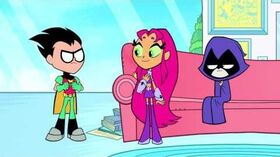 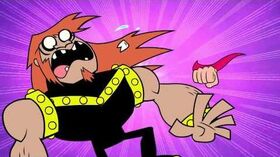 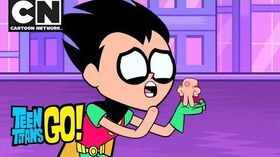 After Starfire kisses his hand, Robin vows to never wash it again.

The episode starts with Beast Boy sniffing and laughing at his body odor, Cyborg poking out ear wax with a chip, and Raven laughing while emitting bad breath. Robin starts giving the other Titans a lecture about personal hygiene. Robin says there are four main areas of bacteria; hair, face, teeth, and hands. After he orders them to say the abbreviation/acronym: “HFTH” (which they fail to do so), Robin then demands Beast Boy, who’s in the form of a raccoon, wash his hair AND fur, which irritates him. He then asks Cyborg to clean his oily face; Cyborg explains he’s part-robot and sprays some lubricant onto his face. Next, he suggests Raven clean her teeth; she furiously responds that she has evil breath and releases a terrible stench that reduces Robin to nothing but a skeleton. After managing to resurrect himself, Robin believes that Starfire also has hygiene issues and tells her to let him check her hands, only to be enamored by their cleanliness. He says he’s glad that at least one of them cares about the importance of hygiene.

However, Starfire says she washes her hands, so if she is trapped in the Tower by a witch and must wait for a knight to rescue her when the knight kisses her hand, he won't be bothered. Robin then expresses his disgust at how unsanitary that would be. Starfire then explains that it is "the nice gesture" and demonstrates it to Robin by kissing the back of his right hand, which makes the others mock his baby-sized hands, but he stops them by claiming that it’s his destiny. Now elated by seeing his crush’s lip-mark, Robin contradicts his teachings by declaring he will never wash that hand again. As Raven questions this, he proclaims that it doesn’t apply to Starfire’s kiss for HIM. Beast Boy is upset by Robin’s vow, and Cyborg asks how Robin is going to keep it clean when bathing. Robin replies by putting and tying a plastic bag with a rubber band over his hand.

3 months later, the other Titans are eating crispy tots when Robin walks into the dining room. With the bag still over his hand, he cannot take his share of the tots, and even though he gets one, it falls onto the floor and gets wasted. Starfire and Cyborg glare at him while Raven reminds him how he hasn’t washed the bag-covered hand all this time. Starfire believes that his hand is now “hygienically-challenged,” though Robin thinks this is impossible because the rubber band tying the bag makes an alright seal. Raven angrily explains that the seal is trapping the germs instead, and Starfire adds he now has an environment for the bacteria to flourish.

As Beast Boy thinks his hand could be infected by germs and might fall off, Robin still thinks that it’s ridiculous due to it being “perfectly clean”, until Cyborg suggests Robin test it by taking the bag off. At first, Robin is irritated at Cyborg because he thinks this will destroy Starfire's kiss, but with his friends leaving their seats and urging him to remove the bag, he reluctantly obliges and...

A few seconds later, it suddenly drops to the ground, terrifying Robin’s friends. As Cyborg tells him the truth, Robin is horrified as well and gets upset since he has to use his useless left hand (which offends it). After Robin tells his left hand to quit glaring at him, Cyborg attempts to comfort him by saying lots of cool guys only have one hand, such as Rick Allen or a pirate, but then he notices the fallen hand has moved on its own...

Yes, indeed it has, and it even stands up with two of its fingers as legs. This freaks out the Titans, except for Robin, who’s excited and glad it’s still alive and believes the kiss magically did this, as Starfire is a princess and she has awakened his hand from its slumber with her “true love kiss”. Raven disagrees with and explains such a phenomenon is caused by bacterial infection, which Beast Boy reckons will soon cause it to turn into a “hand zombie.” Cyborg agrees, adding that it’ll probably try to eat someone’s brain eventually. Nonetheless, Robin persists in believing this is fairytale magic and refuses to wash the detached hand. Although Cyborg continues to explain the mutated hand is a mindless zombie, Robin orders it to do a flip-in to prove his point, and he’s very proud of it as it does so, scoffing at Cyborg by saying, “Can a mindless hand zombie do that?” Raven disagrees, adding as she has never seen one before. Suddenly, the crime alert rings and Robin commands everyone (including the hand) to take action.

At the crime scene, Mammoth broke out of Jump City Bank and ready to escape with his loot—two huge safes-- until he’s met with the Titans and...Robin’s hand. Robin greets Mammoth (not forgetting to add a hand-related pun) before giving his hand a small red cape and a high-five. Mammoth doesn’t see it as a threat and throws the safes towards it, but instead, they become steps for the hand and it instantly turns itself into a fist, punching Mammoth in the face (causing him to lose a tooth) and throwing him into a nearby wall. Even though Mammoth recovers from his crash, right after Robin makes a bro-fist with the hand, the hand takes out Robin's staff and avoids Mammoth's stomps. The hand beats him up hard, surprising Starfire, who falls for its superior prowess. As the hand pushes Mammoth and damages a fire hose, Robin keeps the kiss from washing away by blocking the hose water with his cape, preserving its “magic”. Raven gets annoyed with the “magic” thing, so Robin puts the hand back into the bag. But the hand disobeys and flirts with Starfire instead, making her like it. Robin cautions his hand to stay away from water, soap, anti-bacterial gel, moist towelettes, or ANYTHING that might wash away the kiss that "brings it to life".

Later that night, Robin searches the whole living room for the hand while Beast Boy and Cyborg play video games. They're so attentive they don't notice Robin lift the couch to look if the hand is hiding underneath until Robin asks them if they have seen it anywhere (offending his left hand again). As Cyborg says he thinks the right hand is in the shower, Robin instantly freaks out and rushes into the bathroom. Robin wishes for it to be wearing the bag and not wash away the kiss, yet the worst has come... when the bathtub curtain is opened, the hand removes its bath towel, revealing the kiss was washed away. Despondent, Robin predicts his hand will fade into eternal slumber and blesses it to rest gently. However, he is confused to see it still alive and using a nail-clipper. After Robin wonders how it can still be being alive and well, the hand throws away the nail-clipper. Starfire, dressed in a green dress, a green bead necklace, and green shoes (with a pink rose on her head), appears and asks if the hand is ready. Then she answers Robin's question by telling him she and the hand are going on a date, and nods continuously and repeats "yes" as Robin tries to confirm it.

Robin realizes Starfire and the hand have mutually reciprocated feelings of romance, though she doesn't allow him to come because she thinks "three is a number related to crowds". The hand, which is nicely dressed in a suit, gives a flower to Starfire (which she accepts), and the two exit, making Robin envious. As Starfire and the hand leave the tower, Beast Boy says they are a beautiful couple, Cyborg bids them to have fun, and Raven expresses her happiness for them, but Robin is annoyed the three who already knew about this. Beast Boy explains how obvious it is, Raven saw it coming a mile away and Cyborg explains that it all started with that fateful first kiss. Cyborg reminds Robin that he can just feel the chemistry between Starfire and the hand. Rather than feeling pleased, Robin blames himself for being so blind earlier by thinking the hand was an enchanted gift, and then realizes Starfire is in deep trouble.

Starfire and the hand arrive at the restaurant Le Chez Romantique. The hand politely lets her sit first, then calls two waiters, one holding plates of sushi for them to eat and the other playing the accordion; the accordion-playing waiter winks at her. The hand uses chopsticks to get its share of sushi, though it fails to do so. This makes Starfire thinks that it's funny and cute. She giggles at the hand, which blushes. Starfire continues to enjoy the date, thanking the hand for wiping her mouth with a napkin. But when she's about to smooch the hand, Robin (who hated seeing waiter #2's flirtation) comes "just in time". He scares waiter #2 away by breaking the accordion with his staff. Robin sabotages the moment, believing that she and the hand have fooled him. Upset by his presence, Starfire asks Robin not to ruin their evening with his jealousy and hand puns until he exposes the hand like a zombie who wants to eat her brain...

The hand rips off its suit in a flash and reveals a fang-filled mouth, the sight of which panics Starfire. Robin challenges it to hand-to-hand combat without hesitation and punches it away, and it retaliates by biting him. After he tosses it away, the hand stands up again. Robin tells it that he has no choice but to bite the hand that feeds him, which he indeed does. The hand slips out of Robin's mouth and slaps him. As he watches, it attacks Starfire, who is petrified and begs it not to consume her brain. Robin stops it by dashing towards it and confronts it with arm-wrestling... no, thumb-wrestling. Robin successfully pins his right hand's thumb, giving him the victory!

After his right hand is stitched back onto his right arm, Robin returns to the Tower with Starfire, and they meet Raven, Cyborg and Beast Boy outside the elevator. Raven thanks Robin for saving their brains, but Cyborg condemns him for almost allowing the hand to go after them. Guilty, Robin apologizes for putting fairy-tales ahead of his personal hygiene and unknowingly allowing his right hand to become a zombie. He promises not to let it happen again... until Starfire shows her gratitude. Neglecting the lesson he has learned, Robin removes his left glove, allowing her to leave a kiss on his left hand. Robin bags it

quickly, and the episode ends with his poor left hand suffocating inside the sealed bag.

The transcript for "Hand Zombie" can be found here.